“A goodish plot, a strong cast and some unexpectedly stylish touches of 50s period noir.” Read on for the verdict on last night’s TV. 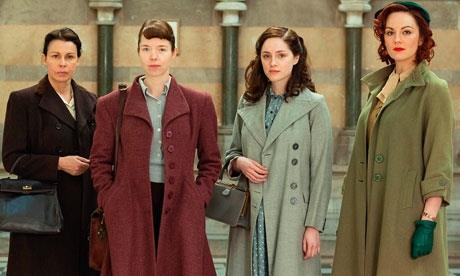 “It’s a good idea, powering a crime mystery with the frustrated intelligence of clever women. But it needed to be a little cleverer itself about the intractability of the world it was depicting.”
Tom Sutcliffe, The Independent

“While straying dangerously close to Rosemary and Thyme territory at times, The Bletchley Circle just about kept the right side of the line, thanks to a goodish plot, a strong cast and some unexpectedly stylish touches of 50s period noir.”
John Crace, The Guardian

“It’s a clever sort of telly this, not least because it manages to turn the dry mathematics of the code breakers’ job into engaging drama, succeeding in that sense where dozens of documentaries have failed.”
Matt Baylis, The Express

“This is a detective mystery whose solution is arrived at collegiately through data accumulation. It’s a rebuke to every lone cop living by his hunches that primetime ever feted.”
Andrew Billen, The Times

“This tendentious but impressively researched documentary proved, at least to its own satisfaction, that mixed-gender businesses did better than single-sex ones.”
Andrew Billen, The Times

“The gimmick here was that Devey began by thinking the only problem was female commitment. If she could do it, she said, so could anyone. There was no such thing as the glass ceiling, she announced, and if women had to work harder to achieve the same as men, well… tough. She had her mind changed (I think), not least by the discovery that the most gender-balanced departments in her own business were delivering the best profit.”
Tom Sutcliffe, The Independent

“Wartime Farm works far better than Edwardian Farm, which felt exactly the same as Victorian Farm, but with a few more gadgets. There is an immediacy in the way the team are forced to innovate in response to a situation that requires the upheaval of decades of traditional agricultural practices in a matter of weeks.”John Crace, The Guardian