“The writing was witheringly acute and the cast a dream.” 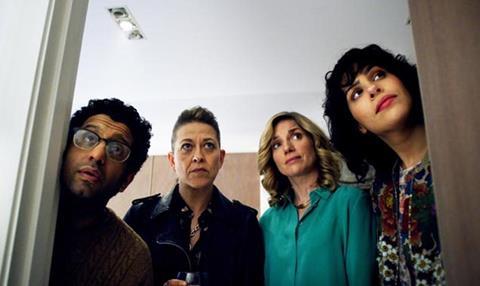 “The writing was witheringly acute and the cast a dream, although Nicola Walker and Desiree Akhavan felt underused as fellow guests. Tobias Menzies, though, was a treat as a man cursed with piercing insight into the foibles of others and none whatsoever into his own.”
Gabriel Tate, The Times

“The supporting cast were excellent, subtly imbuing their characters with an unhinged quality that wound up winning your sympathy. The simplicity of the ‘sit’ would lend itself perfectly to a full series. Let’s hope The Circuit gets one.”
Michael Hogan, The Telegraph

“The script ricocheted between the satirical and the absurd. One moment it was mocking the dinner party set’s shallow insecurities, the next a Hungarian woman was weeping into her goulash and braining her husband with a wine bottle. It was trying too hard, in other words, crowding too much in.”
Christopher Stevens, Daily Mail

“My expectations were high but by the end of The Circuit, they were dashed. I was drained, I hated everyone, and I wanted to run away and watch Stranger Things. It was just like going to a really bad dinner party.”
Chitra Ramaswamy, The Guardian

“For 39 years TV comedy writers have pursued the televisual equivalent of the Holy Grail – coming up with a worthy successor to Abigail’s Party. I’ll be very surprised indeed if we are still talking about The Circuit 39 years from now.”
Viriginia Blackburn, Daily Express

“Horizon: My Amazing Twin restored my faith in humanity. It was a brave and generous investigation that found no real answers but was consoling nonetheless.”
Chitra Ramaswamy, The Guardian

“A trip to Vietnam, where the full pan-generational effects of Agent Orange are only now becoming clear, provided a sobering counterpoint to a curious but absorbing investigation.”
Gabriel Tate, The Times

“The rags-to-riches story wasn’t as dramatic this time. Turning an ailing club around is an all-or-nothing narrative. Maintaining its momentum isn’t quite as compelling.”
Michael Hogan, The Telegraph

“For those of us with no interest whatsoever in sport it’s been a rather trying few weeks. So what did the BBC choose to fill its major prime-time slot on a Thursday night? That’s right, a documentary about football. I know that half of the country is sport mad. But still. For pity’s sake.”Virginia Blackburn, Daily Express

“Television has to stop treating footage like this as entertainment. In reality, it’s a frightening indictment of casual violence on the increase in Britain, and there’s nothing funny about it.”
Christopher Stevens, Daily Mail