TV Critics: The Crimson Field; The Trip To Italy 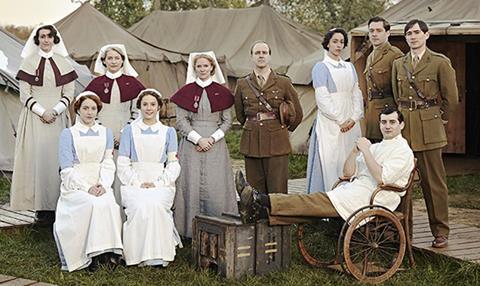 “It looks a bit as if they’ve looked at what’s done really well recently, Sunday night period drama-wise, then made a kind of amalgam. Though it’s not my thing, it is well done – lavish, performed with gusto, obviously well researched, and historically fascinating.”
Sam Wollaston, The Guardian

“This was an imaginative alternative to Tommies in the trenches, telling the story of four women who join up to serve in World War I. There was a little bit of gore, but not enough to deter a mainstream audience.”
Christopher Stevens, Daily Mail

“Despite the absurdly pretty nurses and the over-sanitised sets, The Crimson Field seemed to have rather more justification to emotionally manipulate us than Call the Midwife has. Despite its knee-high corn, it is a seductive proposition.”
Serena Davies, The Telegraph

“Writer Sarah Phelps does not exactly transcend her restrictions but she – and a high-class ensemble cast led by Oona Chaplin, Hermione Norris and Suranne Jones – make them work. If The Crimson Field is not still running in 2018, I shall be surprised.”
Andrew Billen, The Times

“Some of what ensued was a little predictable, including a nasty matron who chewed the fresh crop of volunteers out over their blanket-folding and lack of decorum. For all its stock elements though, this is extremely good drama.”
Matt Baylis, Daily Express

The Trip to Italy, BBC2

“Coogan and Brydon bounce off each other as playfully as slightly care-worn little kittens, and last night was the first time in aeons that I have turned on the telly and repeatedly laughed myself to tears. Put simply, Coogan and Brydon may well be the best comic double act around.”
Mark Monahan, The Telegraph

“That all this feels far from an indulgence is a triumph. This is Michael Winterbottom’s vision. It’s a simple, uncopyable one in which talent is allowed to just be. And for that, all three ought to be applauded.”
Will Dean, The Independent

“What shocked me about Friday’s The Trip to Italy was its resemblance to the first, down to the brilliant dinner-table Michael Caine impressions and the pretence that Coogan, whose last movie was nominated for an Oscar, is in career decline. It is still very funny, of course, but this rich feast looks as if it is repeating on itself.”
Andrew Billen, The Times