TV Critics: The Dealership; How to Get a Council House; Shoplife

“Selling is always interesting, and it doesn’t get much rawer and purer than secondhand cars in Essex.” Read on for the verdict on last night’s TV. 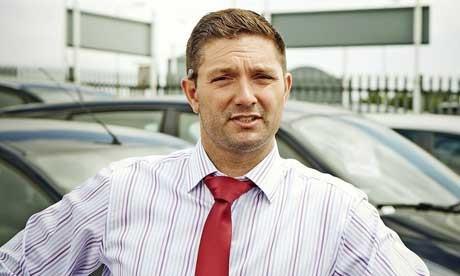 “There’s nothing new about the format of The Dealership. We’re talking old school fly-on-the-wall docusoap here, it could easily have been made 10 years or more ago. This kind of show only ever worked if it was about a really interesting place or if it had amazing characters… Luckily then, The Dealership has both of those things… Selling is always interesting, and it doesn’t get much rawer and purer than secondhand cars in Essex.”
Sam Wollaston, The Guardian

“Used-car dealers? In Essex? With a geezer-ish voiceover and a manager who describes his staff in terms of motors? It sounds like parody but is actually quite sweet, if a bit dull.”
Rebecca Armstrong, The Independent

“This programme, for various reasons, is in the Rolls-Royce class of reality TV. There’s something endlessly fascinating about watching salesmen at work, whether they’re good or bad… Traditionally, of course, our reserves of affection and respect for the car salesman are about as big as the ones we have for estate agents and health and safety officers. Strangely, though, this programme manages to make you root for them.”
Matt Baylis, Daily Express

“There was a slight whiff of condescension to this opener – you got a sense that, behind the lens, the documentary makers were looking on with a faintly mocking smile… That and hardman actor Jamie Foreman’s over-the-top narration were my only misgivings, though. This was an entertainingly observed piece of film-making, highlighting just how stressful a life based on the bottom line can be.”
Patrick Smith, The Telegraph

“I hope the extensive Rainham forecourt, at one point last night compared to the African plains upon which lions stalk their prey, contains enough personalities to fill three hours. Given that the dealership’s boss, Greg, was not quite the carpet chewer one would want for artistic reasons, last night’s opener largely rested on James’s shoulders. Mind you, were there a star-ranking for shoulders his would merit five.”
Andrew Billen, The Times

How to Get a Council House, C4

“It made for depressing, enlightening viewing… The stories were balanced and affecting; you genuinely felt for these people. To have not emerged thinking that the system is humiliating and impenetrable was just about impossible.”
Patrick Smith, The Telegraph

“Much rubbish is talked about social housing, usually with regards to how easy it is to nab yourself a gigantic property for low cost without having done anything to deserve it. The reality, as shown by this fly-on-the-wall look at the goings-on in an overstretched housing office in east London, is that people, deserving or otherwise, wait years for adequate housing, trapped in a system that does its best to be fair but can’t cope with either the numbers of claimants or the lack of housing stock.”
Matt Baylis, Daily Express

“Rather than being a guide to slipping through the loopholes of council accommodation, as its name suggests, for the sort of people whom certain newspapers (and certain politicians) would dub feckless, it instead showed people playing a hopeless numbers game that almost everyone was losing… There aren’t a lot of laughs anywhere in the housing system, but neither is there any fecklessness in evidence.”
Rebecca Armstrong, The Independent

“On Shoplife, a competing, slightly less captivating, serial treatise on consumerism, filmed at the MetroCentre in Gateshead, the young shop assistants were surrounded by glistering everything. It was exquisite torture: on their minimum wages plus commission, and their uncertain contracts, they could barely afford anything they were trying to sell.”
Andrew Billen, The Times