TV Critics: The Dresser; The Hunt

“Someone should find another vehicle for these two, and quickly, because they made for one of the best television pairings I have ever seen.” 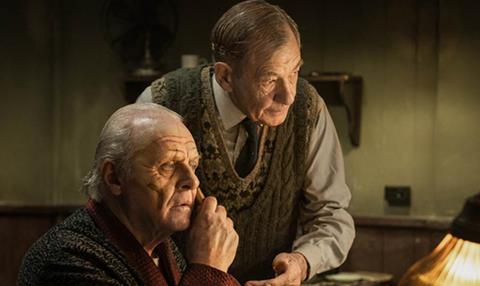 “Sir Anthony Hopkins delivered an excellent – and terrifying – performance as a man who was losing his mind, his appeal, his health and his wife all at once. This was a thoroughly depressing yet brilliant production.”
Amy Burns, The Independent

“Everyone acted their socks off — especially Hopkins, who had licence to claw the wallpaper and chew the carpet, like Richard Burton impersonating a toddler. All hugely impressive, but not a spectacle to send you to bed with a smile.”
Christopher Stevens, Daily Mail

“Hopkins managed both to dominate the screen and convey vulnerability in a way that only those who are genuinely getting on in years can but he was more than matched by Sir Ian McKellen. Someone should find another vehicle for these two, and quickly, because they made for one of the best television pairings I have ever seen.”
Virginia Blackburn, Daily Express

“Anthony Hopkins thundered and quivered as the frequently monstrous, quietly frail actor-manager Sir. It was like watching a man falling back in love with acting after two decades of dross. The director Richard Eyre kept the action stagey and theatrical in the best possible sense.”
Gabriel Tate, The Times

“Single plays on television are rare beasts and when they do crop up they tend to come with plenty of hand-wringing about how there aren’t enough of them. The Dresser brought with it arguments both for and against. However, director Richard Eyre made the most of what he had.”
Benji Wilson, The Telegraph

“New landmark series will mark the land only if they have a good story to go with the pictures. And in the simple will-they-won’t-they device of a chase told with the direction and skill of a Hollywood movie, the producers of The Hunt have managed to add narrative tension to startling photography – with scintillating results.”
Benji Wilson, The Telegraph

”It’s stunning to watch, but so far there is no sense of storytelling on a grand scale: it’s just one predator after another stalking prey. There’s no denying the brilliance of the photography, but the intellectual ambition is lacking.”
Christopher Stevens, Daily Mail

“What this really is is just a series of hunts. It’s about: the spectacle, the excitement, the thrill of the chase. It’s Bond, not Le Carré. Spectre, basically, the animal version.”
Sam Wollaston, The Guardian