TV Critics: The Fall; Dates; Precision: The Measure Of All Things

“A gripping, slow-burning, brilliantly constructed tease.” Read on for the verdict on last night’s TV. 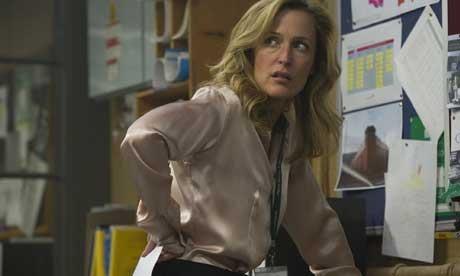 “From a fine beginning to an absolutely stonking end. Even in the wake of last week’s sofa-munchingly scary cliffhanger, I half-expected the concluding episode of The Fall would be a terrifying yet conventional cop-drama race to the finish, leaving the killer in jail, the kids tucked up in bed, and the world a safe and comfy place again. Instead we got a gripping, slow-burning, brilliantly constructed tease.”
Gerard O’Donovan, The Telegraph

“So audacious was the drama’s denial of climax that you could probably hear a muted roar of frustration as the credits rolled… I find myself torn between disappointment and admiration. On the one hand, we have been left gagging for some kind of narrative release. On the other hand, Alan Cubitt’s drama has always tried to twist away from the conventions of the form to something more complicated and unsettling.”
Tom Sutcliffe, The Independent

“There have been times throughout this series when the plot felt a little light on detail… But this is a minor discomfort. Nobody does intelligent ice queen better than Anderson, and I’m assuming that awards makers are already preparing a ‘Jamie Dornan’ stamp to save themselves time. To play a good guy as well as a bad one is not too difficult – to make the one as compelling as the other, and to make them recognisably the same guy too, as Dornan does when the rage and discipline of the serial killer seep into his dealings with the local thugs, is near miraculous.”
Lucy Mangan, The Guardian

“There is little not to praise about The Fall. As well as the scorching visuals and almost metallic soundtrack, there’s the acting: the leads Jamie Dornan and Gillian Anderson communicating so much in stillness, even while moral compasses are twitching all over. A class piece.”
Alex Hardy, The Times

“Oona Chaplin and, perhaps more surprisingly, Will Mellor gave performances of such volcanic combativeness they more than did justice to Bryan Elsley’s pyroclastic flow of dialogue. It took a while to get going but once the tension between them was established it was a treat to watch it crackle and flow… I didn’t just want more, I couldn’t wait to see how successive episodes would link and weave into a format so unforgivingly dependent on great writing and acting.”
Gerard O’Donovan, The Telegraph

“This is a format of brilliant simplicity and endless potential, helmed by Elsley in a writers’ room where they began by discussing their own experiences. Anyone who has dared to date recently will want to bite off their own fist with recognition.”
Alex Hardy, The Times

“The writer who wants to leave an impression behind will always be tugged towards a gratifying finish. Credit due to Bryan Elsley, then, for ending the first of Dates with an ambiguity.”
Tom Sutcliffe, The Independent

Precision: The Measure Of All Things, BBC4

“Marcus Du Sautoy’s account was very much on target, being full of pithy anecdotes and practical examples, shedding much light on all the time-space-quantum stuff that sends the average on-expert head into orbit.”
Matt Baylis, Daily Express