TV Critics: The Field of Blood; The Men Who Made Us Thin; Legally High

“It’s a potent brew of corruption, conflict and car coats.” Read on for the verdict on last night’s TV. 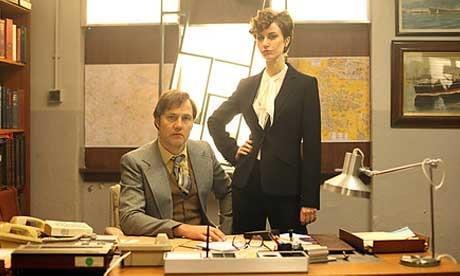 The Field of Blood, BBC1

“Jayd Johnson has lost none of the gritty-yet-vulnerable appeal that earned her critical acclaim last time around; and if she’s not reason enough to tune in, the plot will have you gripped… The opening half was bleak but authentic, from the clack-clack of the Olympia typewriters to the obligatory Irn Bru advert.”
Sarah Rainey, The Telegraph

“It’s a potent brew of corruption, conflict and car coats but hasn’t yet coalesced into anything substantially moreish… The plotting is baggy and the beautifully played banter between McVie, Paddy and the other journalists only throws into relief the clunking lines elsewhere.”
Lucy Mangan, The Guardian

“While the television version of The Field of Blood lacks the sense of human fraility of the Denise Mina books on which it’s based, occasionally seeming clunky in comparison, its great strength lies in the accurate portrayal of a distant, darker time.”
Sarah Hughes, The Independent

“The Field of Blood is one of those dramas that will suck everyone in… At its core are the three simple things every drama needs to be top-flight: great actors, great characters, great plot.”
Matt Baylis, Daily Express

“Jayd Johnson’s Paddy and, of course, David Morrissey’s editor compel, but the piece does rather trade on its nostalgia value. It’s so of its time, even the script’s left-wing.”
Andrew Billen, The Times

“Jacques Peretti kept the tone nicely balanced between curiosity and outrage, although it was hard not to feel dispirited as he talked to the diet pushers themselves… Hard too not to feel that for all the research, the interesting interviews and the clever use of footage there was little new here.”
Sarah Hughes, The Independent

“At the end you felt replete with facts and understanding instead of strangely empty and depressed, and realised you had gone so long eating televisual fast food that you had forgotten what steak tasted like.”
Lucy Mangan, The Guardian

“The Men Who Made Us Thin had one obvious yet shocking point to make. The diet industry is worth billions but diets don’t work. If they did, the industry wouldn’t be worth billions. A programme that merely repeated this point several times would have been dull but fortunately, alongside hammering home his point, Peretti interviewed a number of rich diet gurus and succeded in making them squirm for the cameras.”
Matt Baylis, Daily Express

“Peretti had long-established evidence that when dieting the body believes it is being starved. When the diet ends, it binges. Yet I felt some sympathy for the diet magnates. You could equally say that all of their products work, if only you used them forever.”
Andrew Bilton, The Times

“It was a chilling insight into hemp shops, underground dealers and exporters who deliver ‘drugs to your door’… This area has been well-documented, but Legally High was original and provocative. I could have done without the thumping trance-like soundtrack, but the rest – trippy, garbled interviews with users; scenes from the delivery depot; depressing portraits on Redcar beach – made for essential viewing.”
Sarah Rainey, The Telegraph