“All human life is here in this little south London joint, gently unfolding to the sound of sizzling fowl.” Read on for the verdict on last night’s TV. 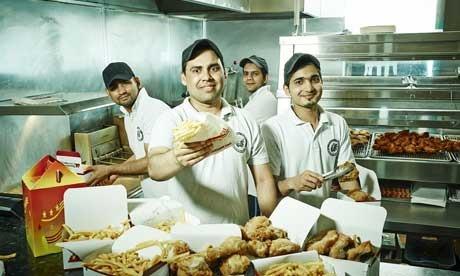 “While this hour-long documentary began with a pitch not dissimilar to the awfulness of those shows on Brits behaving badly (in Ibiza, in Benidorm, in Ayia Napa and now on Clapham High Street), it morphed into something textured, tender and poignant.”
Arifa Akbar, The Independent

“It’s an unlikely but brilliantly simple idea: all human life is here in this little south London joint, gently unfolding to the sound of sizzling fowl.”
Mark Monahan, The Telegraph

“It can’t have cost very much to make – rigging up a few fixed cameras in a fast-food place, then leaving them to roll for three weeks. Followed by the mother of all editing jobs, to turn it into something, with stories… Anyway, the result is brilliant – not really about what we eat, but about who we are in Britain today.”
Sam Wollaston, The Guardian

“Its production is like a younger sibling [of One Born Every Minute], not quite as slick, as tiny microphones pop from the clothes of its subjects, giving away the game a bit. Mainly, though, this was lovely stuff, in which the menu was reduced to crude categorisations – a meal 13, a 15 – but people rarely were.”
Alex Hardy, The Times

“The best bits were when no on was talking and the camera just caught people’s faces… Obscured by a great deal of chilli sauce and drunken shouting, however, these few good nuggets are not enough to satisfy.”
Matt Baylis, Daily Express

“Classical music, for want of a better phrase, is the most endlessly rewarding and exhilarating phenomenon in the whole of human intellectual endeavour. And it was surprisingly moving to see these seven enthusiastic and articulate young Samurai grasping that it is not just for ‘posh people, rich people, old people’.”
Mark Monahan, The Telegraph

“I remain a fan of saint Oliver, although the catch here is that his store cupboard isn’t exactly one of the people. As he roasted a side of salmon, he told us to smother it with oil from the sun-dried tomatoes we’re meant to own. Many people will have heard: yeah, and pile on some spice rub, crafted from a chargrilled five-pound note.”
Alex Hardy, The Times