TV Critics: The Great British Bake Off; Doctor Foster; You, Me and the Apocalypse

“Bake Off is not just inclusive and reflective of our nation, it’s also just kind of nice. Maybe nice is the new nasty…” 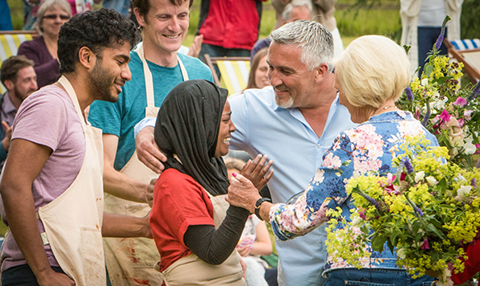 The Great British Bake Off, BBC One

“In all, this felt like a rousing celebration of another hit series. The camaraderie between the bakers was palpable – one reason why this cosy contest has become a phenomenon. The result still mattered, though, and the judges delivered the right one - not just fully deserved but the winner half the nation wanted.”
Michael Hogan, The Telegraph

“There’s a clue to their success in that opening exchange, the key words: “mate” and “chum”. Even if you find their insatiable (admittedly knowing) punning groansomely awful, they are friends, and that warmth spreads throughout the show like something chocolatey, oozy, lickable. Bake Off is not just inclusive and reflective of our nation, it’s also just kind of nice. Maybe nice is the new nasty…”
Sam Wollaston, The Guardian

“In the end it was pretty straightforward. Nadiya Hussain, she of the many wonderful facial expressions and endearing nervous giggle, was named the winner of the sixth season of Great British Bake Off. And it was thoroughly deserved.”
Sarah Hughes, The Independent

“Nadiya’s win was wonderful for all sorts of reasons. Hussain is not just a star baker, she is a star. Her own series surely beckons and the man from the Mail will just have to swallow it.”
Andrew Billen, The Times

“The end – victory of sorts, separation, back to work, a chance encounter in the square – feels like it doesn’t really know how to (end). I guess anything was always going to be an anticlimax after all that, but is it really just going to fizzle out happily in the sunshine with a song? No, a man collapses, someone else needs bringing back from the edge. Doctor Foster ends with random CPR.”
Sam Wollaston, The Guardian

“After her hurricane-force performance in the title role, Surrane Jones is hereby anointed the new Bette Davis, the scariest woman on television since, well, Theresa May on Tuesday. For much of the episode, the good yet increasingly hard-to-like doctor seemed deranged, although, as with Hamlet, one could never be sure to what degree the derangement was tactical.”
Andrew Billen, The Times

You, Me and the Apocalypse, Sky1

“The zippy script was potty-mouthed and playful. However, the sprawling plot’s pace was too leisurely and pleased with itself. If I’m going to stick with this ambitious 10-part series, it needs to start drawing those threads together, uniting its disparate characters and making sense of the chaos. Otherwise it won’t be the end of the world as much as the end of my tether.”
Michael Hogan, The Telegraph

“The first instalment of Professor Iain Stewart’s fascinating new three-part documentary was stuffed with analysis and insight. There was a fair bit of geophysical science to boot but it remained at heart a characterful, entertaining human story. But it could hardly be otherwise when so much of human history is soaked in oil.”
Matt Baylis, Daily Express

“I’m still trying to work out what the point of Million Pound Properties is. This gives our television programme-makers and their viewers an opportunity to snoop around the lavish homes of the very lucky. Unfortunately, the more our housing market overheats, the less remarkable many of these places are, just like the people in the show.”
Matt Baylis, Daily Express