“Pruning two days of footage into a gripping hour is no mean feat and this was tight as a marquee guyrope.” 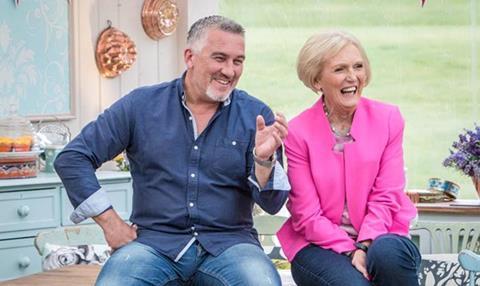 “Like MasterChef and The Apprentice, Bake-Off is expertly cast and beautifully edited. Pruning two days of footage into a gripping hour is no mean feat and this was tight as a marquee guyrope.”
Michael Hogan, The Telegraph

“The real joy of it is seeing a grey-haired prison governor next to a young mum in a hijab, both of them doing intricate and beautiful things with tempered chocolate. There is something both British and great about that.”
Sam Wollaston, The Guardian

“What do the competitors tell us about modern Britain? They told us last night that the guy with the nose ring and tattoos, the fireman, the Muslim in the headscarf, the ice-blonde Lithuanian and the hunk who looks like Paul Hollywood, all have more idea of how to bake a madeira than your indigenous, unpierced, Mr-Kipling reliant mother.”
Andrew Billen, The Times

“It’s already obvious who to back for the final. The Mary Berry-approved gran Marie may have won star baker, but Sandy, a 49-year-old child welfare officer from Bradford, has the insouciance of series four’s Ruby, the playful wit of series fives’s Norman and the cool-headed competence of series two’s Joanne. Let’s get T-shirts made up, asap.”
Ellen E Jones, The Independent

“There’s something venerable and ancient about the way The Great British Bake Off is held in a pristine white tent in the middle of a Berkshire field. It looks like some time-honoured tradition and I suppose this show is well on its way to becoming part of our islands’ ceremonial calendar. Rolling cheeses in Gloucestershire, dancing with stag antlers in Staffordshire… making Madeira cake in a jousting tent on BBC1.”
Matt Baylis, Daily Express

“If there’s one thing the BBC does very well, it’s nature documentaries. The first instalment of Earth’s Natural Wonders was up there with the best of them. The end of the hour left me wishing these projects weren’t over quite so quickly. Give me an hour on Everest or about those nasty ants please, Auntie.”
Sally Newall, The Independent

“The photography was as spectacular as the settings, but it was the anthropology, not the geography, that made this show such thoroughly good viewing. The narrative switched back and forth, one minute soaring with condors above the Grand Canyon, the next edging towards a crevasse on a Nepalese glacier. Every minute was absorbing.
Christopher Stevens, Daily Mail

“All these hypothetical situations did not make for visually interesting telly for this non-space enthusiast. There was no real action. Anything actually exciting was created using CGI images, which gave the whole thing a kind of Tomorrow’s World vibe.”
Sally Newall, The Independent

“All the programme had to go on was a lot of near misses and what ifs. Factual television should be exactly that – factual. Mock-ups of a globe wrapped in a skin of whirling debris and computer models of prospective collisions just aren’t very interesting.”
Harry Mount, The Telegraph

“Within 15 minutes this programme had said all it needed. The next three-quarters of an hour were repetitive and padded, just more scientists repeating what the others had said.”
Christopher Stevens, Daily Mail

“Space is full of junk. Having got that not very complex point across, this programme then orbited around it endlessly like some old, rusting telecoms satellite, still beeping it’s signals away to a world who’d long since stopped listening or caring.”
Matt Baylis, Daily Express