TV Critics: The Great British Bake Off; Secrets From The Clink; The World’s War 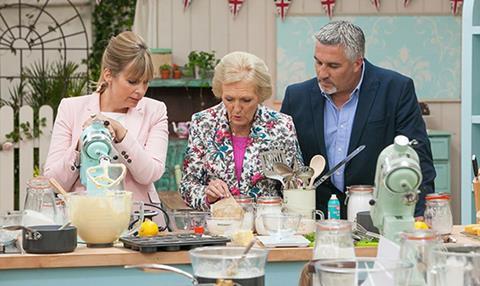 “This was simply a delight as our bakers fretted over drizzles and tended to their elaborate decorations as they created Swiss rolls like nothing you have ever seen before.”
Virginia Blackburn, Daily Express

“There was Mary Berry in a funky floral blazer; Paul Hollywood with his icy put-downs and even icier eyes; Mel Giedroyc and Sue Perkins with their endless innuendos about buns, nuts and muffins. There were 12 oven-fresh contestants, a bunting-bedecked tent and that familiar theme tune that heralds the end of our summer diets and the beginning of a nationwide baking binge.”
Sarah Rainey, The Telegraph

“The contestants’ creativity is ever-impressive and this episode featured innovative home-made baking gadgets like a mini-guillotine for ensuring an identical finish. It also makes for surprisingly gripping viewing.”
Ellen E Jones, The Independent

“You need to like cake to like Bake Off and I really don’t, but dispassionately speaking, it is hard to know how it could be improved upon, either as game show or documentary.”
Andrew Billen, The Times

Secrets From The Clink, ITV

“For the 393rd time in the recent history of television, a group of celebrities with nothing in common except that they agreed to do the show, were asked to hand over details of their family tree to a production company who then drafted in the usual genealogists and keepers of dusty parish records to dig up something interesting about their ancestors.”
Paul Kendall, The Telegraph

“What the two-part Secrets from the Clink actually did was take Goodman and company and conduct the penal version of Who Do You Think You Are?”
Will Dean, The Independent

“The Clink commentary was informative and drew intelligent contemporary comparisons, between, for instance, the demonising of the Victorian poor and our own benefit ‘scroungers’.”
Andrew Billen, The Times

“This was a fine and intelligent tribute to all those who sacrificed all and deserve belated honour now.”
Virginia Blackburn, Daily Express

“Olusoga presented the film with flair and passion, not least when discussing the hypocrisy of taking men from their homes in chains, as the French did in Senegal, so that they could join the Allied powers’ fight for ‘liberty and civilisation’.”
Paul Kendall, The Telegraph