“The display of finely honed baking skills is BBC2 at its very best.” Read on for the verdict on last night’s TV. 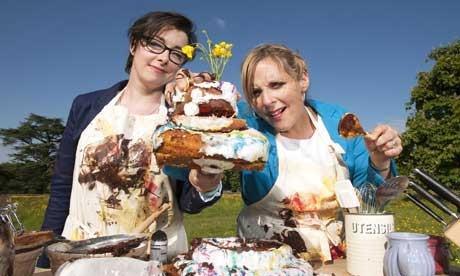 “The display of finely honed baking skills is BBC2 at its very best – taking something a bit esoteric, perhaps even a bit difficult to understand, and making it addictively entertaining for a mass audience.”
Neil Midgley, The Telegraph

“A review is not strictly necessary. All that needs to be said is that everything is exactly the same as before… It’s comforting and undemanding viewing. If you nod off for a few minutes, you don’t have to worry about missing anything very much. It’s also lethally addictive, wrapping you up in a warm Ready Brek feel-good glow where no one and nothing else matters for an hour.”
John Crace, The Guardian

“Fans of this show are clearly sadists who take pleasure in watching these lovely people aim for the heavens with their crazy chocolate confections, only to snicker as they fall apart and fail. Sadly, I’m as bad as the rest of you and, having been sucked in by Mary’s stern stare, I will now be mournfully watching soufflés subside for the next 10 weeks.”
Sarah Hughes, The Independent

“Although the show is a predictable source of double entendres and although the first episode sees a fiftysomething woman called Deborah on her knees shouting: ‘It’s still wet inside!’, the real star was Toby. Oh Toby, I think I love you. Whole Richard Curtis films could be devoted to Toby and I’d watch them all.”
Helen Rumbelow, The Times

“This was an involving and wonderfully well-acted piece of television, one that thrust you straight into a fully imagined world, forcing you to pay attention while making you almost queasily complicit in its characters’ sins.”
Sarah Hughes, The Independent

“Everything has got a lot darker. No one is safe; making it through unscathed to the end of the day is an achievement in itself. The bad guys have got even badder; baby-faced kids will take your mobile off you without a flicker and the church is doing its best to screw over the few people who are trying to make an honest living. But it’s still serious, and seriously good.”
John Crace, The Guardian

“It is Ashley Walters’s compelling screen presence which lies at the heart of this multi-layered, ambitious piece of work. I can’t wait to see how clever Dushane fares in the world he seems to manipulate, but which ultimately, tragically, manipulates him.”
Ben Lawrence, The Telegraph

“You could not fail to be moved by the midwife who almost broke down when reading a message from another set of parents whose child had been born, as they put it, ‘sleeping’. This was an immensely affecting moment in what promises to be a very involving series.”
Virginia Blackburn, Daily Express