“After a while even the sight of people doing some last-minute ironing ends up somewhere between hypnotic and genuinely exciting.” Read on for the verdict on last night’s TV. 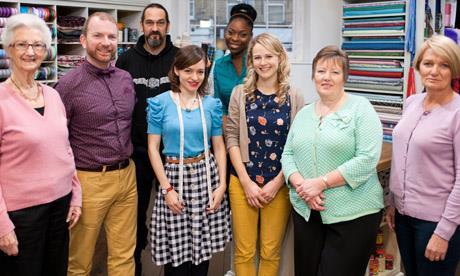 “This is made by the same people [as The Great British Bake Off] to the same recipe/pattern, only we’re making A-Line skirts not Victoria sponges. And the West Country marquee full of pastel shades has been replaced by an East End workshop full of sewing machines and haberdashery… It’s not totally uninteresting to me. I would say I’m appreciating it, rather than actually enjoying it. To be honest the sewing I can take or leave – seersucker and bias-binding are never really going to do it for me. But I’m interested in people, I enjoy a competition, the drama of the weekly cull.”
Sam Wollaston, The Guardian

“We’re following a similar formula/pattern/recipe here. We’ve got all the key narrative elements of Bake-Off apart from a squirrel with anatomically disproportionate testes. But, like Britain’s Got Talent and The X Factor, there’s a reason. It works. And the eight contestants chosen here are all so darn likable that even someone who hasn’t so much as sniffed a needle and thread since Year 8 D&T is quickly drawn into proceedings.”
Will Dean, The Independent

“At times the programme seemed like an extended comedy sketch deftly satirising copy-cat television. Yet, the longer it went on, the harder it became to resist. For one thing, there’s the contestants themselves: not the delusional braggarts of so many other shows, but, as in Bake Off, rather nice people nervously doing their best. For another, the competitive format is so sturdy that after a while even the sight of people doing some last-minute ironing ends up somewhere between hypnotic and genuinely exciting.”
James Walton, The Telegraph

“Sewing Bee seems a fine example of the BBC’s role as a god of the gaps, filling in niches commerce cannot reach… The show provided the traditional delights of this genre: triumphant craftsmanship; unexpected disasters; and the joy of watching a programme itself lovingly put together to both entertain and inform.”
Andrew Billen, The Times

Crossing England in a Punt: River of Dreams, BBC4

“The River of Dreams is the Trent, which Tom Fort rows slowly down, steering clear of rapids and the involuntary spoonerisms that can be a hazard to any punt captain. He passes ancient battlegrounds, magnificent power stations, forgotten backwaters. And he talks beautifully about the Trent.”
Sam Wollaston, The Guardian

Keeping Britain Alive: The NHS in a Day, BBC2

“This is really just a people-going-into-and-out-of-hospital programme, no less moving or sensitive for that, but not, except for the odd line or two, doing all that much to trumpet the achievements of our state-funded healthcare programme. As I watched an assortment of souls going through kidney transplants and alcohol detox, having their babies and being assessed for dementia, I found myself wondering why the voice in the background wasn’t saying more. Why it wasn’t shouting, in fact, every five minutes that we were among the luckiest individuals on Earth to have all this available to us, free?”
Matt Baylis, Daily Express