“Despite the lack of tension, Sewing Bee is nice, gentle and aesthetically pleasing to watch.” 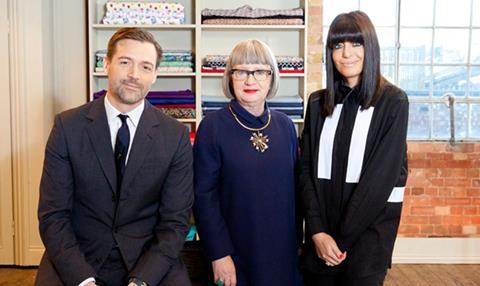 “The Great British Sewing Bee has all the ingredients required to be an addictive show but lacks the drama of Bake Off – it’s hard to get worked up about somebody not cutting on the bias accurately when you don’t know what cutting on the bias means. Despite the lack of tension, Sewing Bee is nice, gentle and aesthetically pleasing to watch.”
Isabel Mohan, The Telegraph

“The show follows a well-tested pattern; no great imagination, playfulness or reshaping going on here. It works, it’s safe, it’s nice. A bit too bloody nice. The only real drama comes at the end, when one of them is sent home.”
Sam Wollaston, The Guardian

“Everyone’s so absurdly nice to each other, it’s as if they don’t actually want to win. To me that’s a problem with a competition, even one more about celebrating creativity. There isn’t much sense of jeopardy in this milieu of hems and pincushions.”
Andrew Billen, The Times

“None of it is really working. Claudia’s going hoarse, the male contestants are mere make-weights, even the head judge, Savile Row designer Patrick Grant, who last year sported a smart military moustache, is now scruffily unshaven with a double chin. Time to zip up the Sewing Bee.”
Christopher Stevens, Daily Mail

“After last week’s unexpectedly funny opener, Ben Elton’s Tudor comedy felt more obvious as it followed the same lines of humour — public transport was rubbish then too; girls can’t be actors Shakespeare’s jumbled prose; the proto-David Brent. The language, however, remains fun and at least here is a sitcom with, yes, jokes.”
Andrew Billen, The Times

“The show is dotted with funny lines and nobody could play the pompous but downtrodden Bard as well as Mitchell. The trouble is, the knowing references have worn off already, making it more like a risqué version of Horrible Histories than an adult sitcom.”
Isabel Mohan, The Telegraph

“The sisters are the sort of chi-chi chefs who buy all their produce at the farmers’ market and know the stall-holders so well they greet them not just by name, but with air kisses. This week they were showing us how to cook comfort food ‘to give you that huggy feeling’, with ingredients such as ‘brilliant asparagus’. Where they acquired this hyper-intelligent vegetable was not explained.”
Christopher Stevens, Daily Mail

“You longed for the ghost of Keith Floyd to appear as a poltergeist in their kitchen and start chucking biodynamic eggs around, whatever they are. The thing is, the food looks great. I draw the line at pretending you can disguise a ribbon of raw courgette as spaghetti but the rest of it was fresh, colourful and utterly unpretentious.”
Matt Baylis, Daily Express