“The writing is tight and the performances are so uniformly good that the minor characters feel every bit as well-drawn as the central trio.” Read on for the verdict on last night’s TV 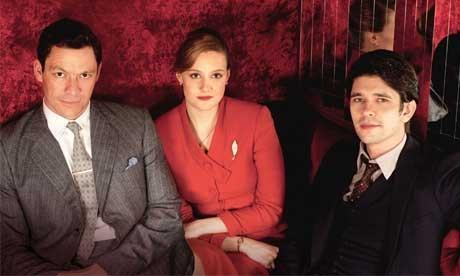 “What you see on screen here is a fantasy of journalism, rather than the real thing, a world in which the incriminating proof is dropped into your hand by an obliging source and the Minister stammers at your probing question, rather than turning round and pointing out the errors. It’s a fantasy in which a story can excitedly be described as ‘Dynamite!’ and nobody stops to think that dynamite can explode in your face. And for the many excellent BBC journalists currently having to live with the consequences of what happened on Newsnight that may be the most uncomfortable parallel of all.”
Tom Sutcliffe, The Independent

“It’s still not entirely clear if The Hour really knows exactly what it wants to be, as the first episode of the new series flitted between the private lives of the main characters and hints of Soho gangland. And I still don’t really care, as the writing is tight and the performances are so uniformly good that the minor characters, in particular Anna Chancellor as jaded Lix, Julian Rhind-Tutt as the never-to-be-trusted McCain and Oona Chaplin as Hector’s wife Marnie, feel every bit as well-drawn as the central trio.”
Sam Wollaston, The Guardian

“Depriving herself of a genre to fall back into, [writer Abi] Morgan has little idea where to focus her attention. Is it the threat to the BBC from ITV? Maybe… One also noted how mediocre the acting is. Nightly at the Royal Court Dominic West is producing the best performance on a London stage, but his Hector is so goofy we do not care about him. Garai, miscast, is surprisingly bad at doing her ditzy-confusion moments. Whishaw is more consistent, but gets illiterate lines… And then there is the plot, or lack of it.”
Andrew Billen, The Times

“Even if this show is coat-tailing unapologetically on the look of Mad Men, there’s nothing wrong with that. The past always looks better than the present. The danger comes when you start to notice all the attention going into the style, when you start to feel that that camera shot of the Sixties kitchen units is there only so that the programme-makers can tell you how much money’s been spent on getting every detail right. There’s a reason you notice these things and the reason is usually that there isn’t much else going on to compete with them.”
Matt Baylis, Daily Express

“It wasn’t as if there was anything terribly wrong with this programme about the social history of the British lunch, it was more that it was just a bit dull. This felt like a documentary that I had seen many, many times before in different guises.”
Sam Wollaston, The Guardian