“The programme-makers showed that you can make 60 minutes of gripping TV about a subject that is exceptionally well known.” Read on for the verdict on last night’s TV. 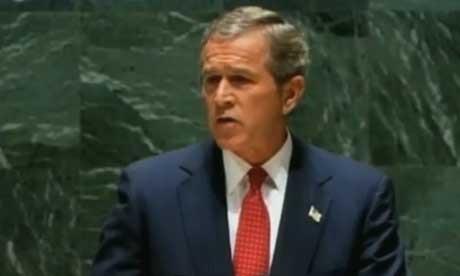 “Brook Lapping, the documentary production company who made The Death of Yugoslavia, are behind this film and they told their story with skill, care and rigour. As with all the best documentaries, there was no attempt to exaggerate: episode one covered the build-up to war and the programme-makers allowed the drama to speak for itself. They also showed that you can make 60 minutes of gripping television about a subject that is exceptionally well known.”
David Blair, The Telegraph

“It’s just far too early still to see the Iraq war with any kind of dispassionate judgement. What you can do – and what The Iraq War did in a gripping manner – is begin to fill out the known knowns (to paraphrase Donald Rumsfeld) with the grit of historical immediacy. Last night’s film was less interesting for its arguments, which we’ve heard endlessly rehearsed before in most cases, than for added human perspective and detail.”
Tom Sutcliffe, The Independent

“The programme’s great service was to re-complicate the story and humanise it. Humanise it not in the sense of softening, excusing or making it more appealing, but in the sense of reminding us that our leaders are people and that even the most dramatic and far-reaching decisions are born out of a webby mass of opinion, estimates, best guesses, personal as well as political alliances, and trust misplaced and justified that gathers round a few granite chips of evidence and hard fact. You were left to feel horrified, sympathetic or some swirling mixture of the two as you chose.”
Lucy Mangan, The Guardian

“Confessions of a Male Stripper applied editorial construction for argumentative purposes, beginning with Danny, 19, who thinks that stripping is a dream job, and contrasting him pointedly with Lotan, 24, who knows all too well that it isn’t. In between times, a lot of young men with improbably ripped abdomens waved their whipped-cream-smeared money-makers in women’s faces.”
Tom Sutcliffe, The Independent

“The stripper lifestyle wasn’t as much fun as some of the boys had imagined. But you couldn’t help but feel that for a lot of them, for a lot of the time, it came pretty damn close.”
Lucy Mangan, The Guardian

“Professor Catharine Edwards was quite a dramatic host, with a disconcerting drawl that largely dispensed with the letter ‘R’… But it was quality classics all the way, a glorious hour of someone blasting away at the calcified ignorance in our brains with her accumulated knowledge.”
Lucy Mangan, The Guardian