“A charming, heart-warming and at times laugh-out-loud watch.” 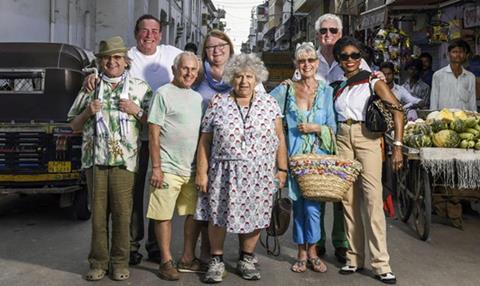 “It’s much more fun than the average celebrity travelogue. Because they are spending a bit of time there, living there, and living there together, so there’s that dynamic, as well as the usual look-at-India-and-the-amazing-colours-but-don’t-forget-how-poor-they-are thing.”
Sam Wollaston, The Guardian

“If you’ve been to India or watched other documentaries about the country, it’s unlikely you will learn anything new from The Real Marigold Hotel. But, like the film, it is a charming, heart-warming and at times laugh-out-loud watch.”
Daisy Wyatt, The Independent

“The first episode of The Real Marigold Hotel sounded utterly naff and was utterly delightful. The celebrities were engaged and engaging, perhaps because they were not there to win modelling contracts but to confront two things bigger than their egos: India and old age.”
Andrew Billen, The Times

“The Real Marigold Hotel really didn’t live up to its billing. The idea of retiring abroad was pretty much abandoned within 24 hours of the group’s arrival in Jaipur. But as a travelogue it worked quite well. Seeing life in Jaipur through the eyes of these creaking celebs brought the city vividly to life.”
Michael Hogan, The Telegraph

“I’m not sure if any of the celebs are seriously considering retiring out there or if they just fancied a paid holiday but it’s nice to see India through different eyes. Or rather, eyes that need bifocals which are otherwise not that different.”
Matt Baylis, Daily Express

“The film, adapted from a novel by Deborah Moggach, is sheer cinema fantasy. Nobody should mistake it for real life. And that is the terrible error of The Real Marigold Hotel, which takes the fragranced dream of the movie and turns it into a rancid nightmare.”
Christopher Stevens, Daily Mail

“Sugar Free Farm was mostly silly fare, but effective in driving home the message for those who grew up thinking fat, not sugar, is the big dietary evil.”
Daisy Wyatt, The Independent

“I tuned in wondering if something like a modern Enid Blyton adventure might be on the cards. Alas not. What we were actually offered, in place of a Famous Five, was a Cellulite Six comprised of celebrities trying to lose weight.”
Matt Baylis, Daily Express

“It was a fun hatchet job but an easy one, as Trump whets the hatchet blade himself.”
Andrew Billen, The Times

“Despite the cartoonish title, Matt Frei’s Channel 4 documentary packed a decent punch. It was diligent, damning and hard-hitting when it came to exposing some of the wannabe US President’s many flaws. We could’ve done without some of the tackier touches, though - the whooping vox pops, jaunty music and that Ivana Trump sound-a-like voiceover.”
Michael Hogan, The Telegraph