“This opening scene was one of the most harrowing 10 minutes of my TV-watching career.” 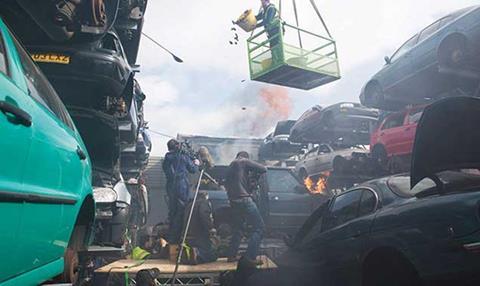 “The opening scene is an extraordinary sequence. I swear you can feel the rising temperature, and the choking smoke, and by the end I’m sweating and coughing and gasping for breath too. It never regains that ferocious intensity but The Smoke crackles along with a tidy script and some nice performances.”
Sam Wollaston, The Guardian

“This opening scene was one of the most harrowing 10 minutes of my TV-watching career. If the Fire Brigades Union was hoping to drum up public support, they could do a lot worse than a screening of The Smoke.”
Ellen E Jones, The Independent

“Within the first quarter of an hour, all the clichés were rolled out. Yet as the episode unfolded it grew much more promising, asking troubling questions about bureaucracy in the fire service and about our desire to label so many people ‘heroes’.”
Tom Rowley, The Telegraph

“The press releases did not prepare me for my almost visceral reaction to The Smoke’s opening episode. Lucy Kirkwood’s intelligent script is fuelled by much more than addrenalin. ITV would surely kill to have The Smoke in its schedules.”
Andrew Billen, The Times

“This is youth-orientated public service broadcasting at its best, and much of that’s down to the presenter. Reggie Yates is informed without being pompous, engaging without being patronising and open-minded, while still able to express an opinion. This is the most impressive thing he’s done yet – bar voicing CBeebies’ Rastamouse, obviously.”
Ellen E Jones, The Independent

“You might imagine his chiselled looks and famous friends are his biggest assets. But that is to seriously underestimate Reggie. He has a talent for making people warm to him. These people had no sanitation and no electricity; some of them looked like they would kill you for a cigarette, but Reggie treated them like stars — and they loved him for it.”
Christopher Stevens, Daily Mail

“The real Henry and Anne may never be glimpsed but we go a long way further in programmes like this, which urge us to see history and its characters from all angles.”
Matt Baylis, Daily Express

“Henry & Anne: the Lovers Who Changed History was nothing short of painful. This was, I suspect, an idea dreamed up by a group of Channel 5 pointy heads who, after charting the recent trend of interest in Tudor England, decided that another programme on the topic would be a shoo-in.”
Jake Wallis Simons, The Telegraph