TV Critics: The Taste; God's Cadets; Secrets of the Body Clock; The Truth About Immigration

“It was as if Sir Tom and will.i.am were made to choose their protégés on the basis of one chord.” Read on for the verdict on last night’s TV. 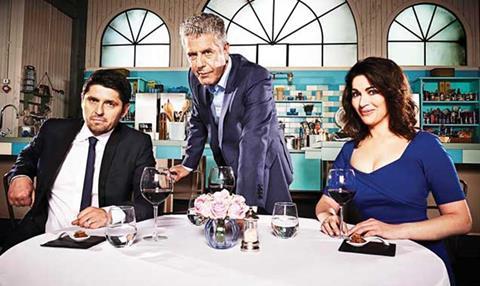 “Directed by Richard Greenwood, this British remake of an American talent show asked the panel to taste one whopping great china wonton soup spoonful of each contender’s dish. That is not, of course, how human beings eat. The game is silly, and will no doubt be very popular.”
Christopher Howse, The Telegraph

“It was as if Sir Tom and will.i.am were made to choose their protégés on the basis of one chord. As the series goes on, those who do manage to overlook its over-processed American production values may warm to the competitors. They will find that easier than warming to the judges.”
Andrew Billen, The Times

“God’s Cadets: Joining the Salvation Army was a 90-minute film crying out to be extended into a series. There were so many fascinating threads left hanging.”
John Crace, The Guardian

“This documentary was full of interesting insights into the sort of people who become spiritual soldiers. If you’re sick of those supposedly ‘behind-the-scenes’ workplace documentaries where there’s never a cross word between colleagues and every boss is an inspiration, then this was an unexpected dose of candour.”
Ellen E Jones, The Independent

“I have no doubt the Sally Army does tons of good social work but we saw here mainly the deprivations it inflicted on its ranks, its feverish addiction to the harshest Christian doctrines and its insularity. Repeatedly, officers worried it might look like a cult. They had cause.”
Andrew Billen, The Times

“This 90-minute portrait, filmed and directed by Nick Poyntz, was so interesting because it left unresolved the question of whether the movement is a sect or not.”
Christopher Howse, The Telegraph

Secrets of the Body Clock, BBC1

“Most of the topics covered were already familiar from half-remembered magazine articles and few of the revelations were earth-shattering, yet, somehow, seen through [Terry] Wogan’s twinkly eyes, they appeared newly interesting. As last night’s viewing reminded us, he’s just a brilliant broadcaster.”
Ellen E Jones, The Independent

“It was a programme filled with trivia and science nuggets. It was fascinating stuff – and rather vindicating for those of us who are at our most lively during the later hours.”
Catherine Gee, The Telegraph

“This programme was a waste of Wogan’s talent. His teatime chat show topped the TV ratings throughout the Eighties; how about reviving the format so he could interview older guests, people with no book to plug but a fascinating story to tell. Now that would be a novelty.”
Christopher Stevens, Daily Mail

The Truth About Immigration, BBC2

“The truth about Nick Robinson’s truth is that it doesn’t really get us any further than David Cameron wittering on about the need to cap immigration, or Ed Miliband saying how much he understands the ordinary working person’s concerns about foreigners. The real truth is that immigration is about politics, not truth, because no one can agree on the facts.”
John Crace, The Guardian