TV Critics: The Thick Of It; The Scapegoat; China On Four Wheels

“There’s no escaping it: this opening episode is – whisper it – disappointing.” Read on for the verdict on last night’s TV. 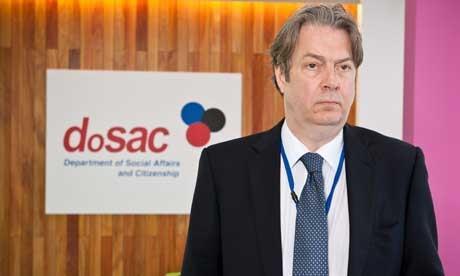 The Thick Of It, BBC2

“There’s no escaping it: this opening episode to the fourth (and probably final) series of The Thick of It – one of the smartest, funniest British TV shows ever made, is – whisper it – disappointing… There is an unsubtlety, a too-obviousness, about it that makes me wonder whether Armando Iannucci, what with all his other projects like taking over America and the world, had let his eye off this one.”
Sam Wollaston, The Guardian

“It’s scabrously funny, stuffed with great lines and a pleasure to watch. But – and ‘but’ is not a word I like using about this series – it’s also possible to wonder whether it might be suffering from the need to live up to its own reputation.”
Tom Sutcliffe, The Independent

“Could there be anything more scarily easy to satirise than scabrous New Labour? Indeed there could, as The Thick Of It demonstrated on its overdue return on Saturday. Creator Armando Iannucci long ago perceived Labour had become the Nasty party. Now he has nailed Cameron’s coalition as a Dad’s Army of incompetents.”
Andrew Billen, The Times

“The Scapegoat was lovely, once you’d overcome the absurdity of the premise… It’s done so artfully and entertainingly, it wasn’t hard to go along for the ride.”
Sam Wollaston, The Guardian

“Go in fast, with bags of style, never for a moment acknowledge the unlikeliness of what you’re proposing and the odds are that you can be miles away before you’re rumbled. The Scapegoat very nearly bought it off. But then, fatally, it stuttered at the last minute.”
Tom Sutcliffe, The Independent

“It pleaded to be played as farce. Period-perfect Matthew Rhys as John/Johnny and the Brideshead director Charles Sturridge chose instead gentility and charm… How on earth did it get greenlit?”
Andrew Billen, The Times

“There seemed to be no real life, anywhere our guides looked, a big, big place but ultimately a bit boring.”
Matt Baylis, Daily Express