“Special enough to give the comedy-drama genre back its credibility.” Read on for the verdict on last night’s TV. 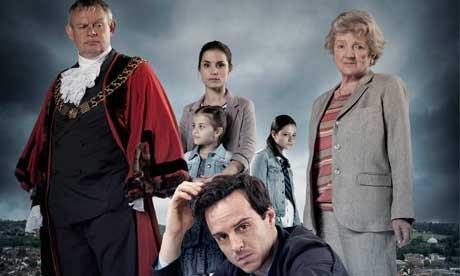 “Big-name casting for two bit-part roles served notice on the viewer that The Town doesn’t intend to be as predictable as some ITV primetime dramas. What followed sustained the promise. Bartlett’s setting and his roster of characters sprawl beyond what would be necessary for a straightforward mystery… His script keeps doing things you don’t expect either. With far too much television drama, you can virtually mouth the lines along with the characters. Not here… The Town has life.”
Tom Sutcliffe, The Independent

“There’s a real deftness and lightness of touch on show as Bartlett allows Mark’s story to unfold slowly and painfully… ITV has been making something of an effort with its drama of late, and The Town feels like a solid step forward, both surprising and intriguing.”
Vicky Frost, The Guardian

“The Town’s pre-title sequence managed to pull off the cleverest act of audience wrong-footing since Sherlock… What was clear was that Mike Bartlett, a big-time stage writer but new to television, was making something special enough to give the comedy-drama genre back its credibility.”
Andrew Billen, The Times

“A touching and revealing account of educational privatisation in China. It seems it’s not only here in Britain that desperate young students are overcharged for duff courses, desperate employees are pressed into moral compromise and desperate graduates find that their qualifications are no guarantee of decent employment.”
Tom Sutcliffe, The Independent

Rome: A History of the Eternal City, BBC4

“There are times in Montefiore’s fascinating exploration of this holy city when he seems to be battling the heavenly hosts to be heard, but the historian prevails, sweeping along the viewer with his irresistible tale of sacred Rome and the gods it has adopted.”
Vicky Frost, The Guardian

“The UK show from which it has been adapted has always made its particular brand of cringe-inducing hilarity look effortless – the American remake, however, underlines that its success was no accident… The boys are just a bit too socially acceptable. That lusciously wrong language also obviously proved too strong for a US audience – and what really is The Inbetweeners without ‘clunge’?”
Vicky Frost, The Guardian