“The documentary’s director fought hard to stress the seriousness of the accidents but absurdity kept breaking through.” 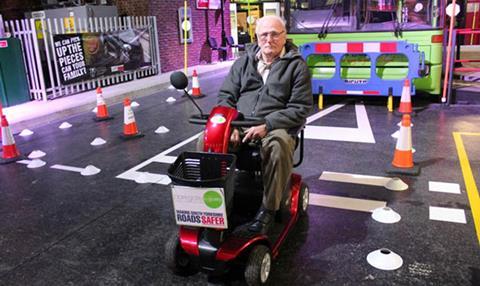 The Trouble with Mobility Scooters, BBC1

“The tone was set from the start – shots of people on scooters speeding and bumping into things in the North and in Wales, against the usual plinketty, tragicomic soundtrack, in this case interspersed with Sixties easy listening. No matter. Its subjects’ humanity cut through the slapstick.”
Michael Pilgrim, The Telegraph

“The documentary’s director Tom Williams fought hard to stress not only the seriousness of the accidents but the ‘lifeline’ these machines offer some 330,000 citizens. Absurdity kept breaking through, however.”
Andrew Billen, The Times

“I’m not sure if I’m supposed to be laughing – it certainly feels like I shouldn’t be – but there’s a fairly slapstick air as we watch scooter drivers bumping and crunching into things, while other people complain about being run over while trying to do their shopping at the Trafford Centre.”
Will Dean, The Independent

“The Trouble with Mobility Scooters examined questions without really answering them in an unexpectedly delightful programme. Most of all the documentary was very touching.”
Stuart Jeffries, The Guardian

“Dan Cruickshank is the least Brummie of TV presenters, temperamentally incapable of the depressively downbeat cadence. He’s like a posh, distressed, possibly Grade-1 listed Brian Cox. And I mean that as a compliment. Enthusiasm, even if feigned as part of presentational technique, is a pleasure to hear on TV.”
Stuart Jeffries, The Guardian

“It was, in truth, much like all Cruickshank films. But a second bottle of Krug is just as good as the first, so no harm in that. Cruickshank is a World Heritage Site in his own right. In fact, he and Jonathan Meades are about the only people on telly who sound like they know more about their subject than the autocue.”
Michael Pilgrim, The Telegraph

“It’s great to see the mighty Dan Cruickshank back on our screens. What he lacks in material he makes up fort with bags of energetic arm-waving”
Matt Baylis, Daily Express

“Viewers will have tuned in hoping for a valedictory whiff of blood, perhaps one final sceptically cocked eyebrow, a last lordly lip curl. In the event, victims were in short supply, and instead Paxmaniacs were treated to a splendid marchpast of political show ponies.”
Jasper Rees, The Telegraph

“How we shall miss that sneer, that raised eyebrow, the quiet menace of that voice, the implied assumption that the interviewee is a rogue with something to hide. Whatever his faults, this man was box office: the BBC’s news output will be duller without him.”
Andy McSmith, The Independent