“An extraordinary true story. Funny, sad, and peculiarly British.” Read on for the verdict on last night’s TV. 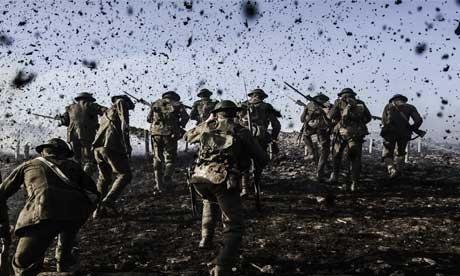 “Ian Hislop and Nick Newman’s wonderful comedy about the British officers in Ypres who printed a spoof newspaper while in the trenches was a defence of the British public school sense of humour: silly, anti-authoritarian and, when necessary, as when you discovered your enemy had already gassed itself to death, tasteless… The BBC is preparing to depress us to death over the next five years with its First World War solemnities. When this bloody war-fest is over, put the Wipers Times on again and celebrate a rival truth.”
Andrew Billen, The Times

“Hislop and Newman clearly wanted to prove The Wipers Times was not a curiosity but an influential publication in its own right, one whose satire echoes through the ages and can be seen today in the likes of Private Eye, The Daily Mash and The Onion. They succeeded in style.”
Sarah Hughes, The Independent

“The drama was the opposite of a moaning misery memoir. Despite countless species of exploding shells, the mud, the rats, gas and death, we saw reflected in the pages of The Wipers Times a heroic habit of resolute cheerfulness… The director, Andy de Emmony, has pulled off a subtly counter-cultural triumph.”
Christopher Howse, The Telegraph

“The thing we got most was blokes in uniform reading and writing and lit up by gas lamps, which didn’t make any of this any more exciting… It’s a sad thing when an interesting story is rendered boring.”
Matt Baylis, Daily Express

“For the first time on TV, we see what happens to a penis during intercourse. And it’s amazing. Not in and out as you might expect, but round this corner, and then this one, bent one way, then the other… Penis yoga, basically. Ow!”
Sam Wollaston, The Guardian