“What is he talking about? Who knows, but it’s lovely.” Read on for the verdict on last night’s TV. 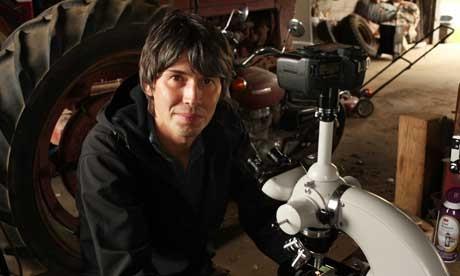 “One mark of how natural a broadcaster Cox is is that it’s very difficult to tell the difference between remarks he addresses to the film crew and the scripted lines he addresses to us. Another is that they can leave his very occasional flubs in the final edit and it only adds to the charm of thing.”
Tom Sutcliffe, The Independent

“You don’t need to understand it all. You can just go along for the view if you want, while a gentle Lancashire lilt washes over you like the ripples lapping the shore of that volcanic lake. What is he talking about? Who knows, but it’s lovely.”
Sam Wollaston, The Guardian

“Because he looks like the rock star he once was and still talks a bit like one, Cox will get stick from critics as well as creationists. He cannot stop being astounded, although his Fast Show catchphrase ‘amazing’ has been replaced by ‘quite remarkable’, presumably because David Coleman has relinquished his hold on the copyright… What I thought quite remarkable, if not amazing, was that I more or less understood everything he said.”
Andrew Billen, The Times

“It’s a rare thing for an episode of Natural World to focus so heavily on a human and I must say I wish it hadn’t. The qualities that made Brolga a dedicated kangaroo guardian made him a less than likeable human being… By the end I was even annoyed that he had to be called Brolga, like some macho fictional hero, instead of just Chris.…Some editor or producer must have found Brolga such a fascinating prenomenon that he warranted more attention than the animals. What a pity.”
Matt Baylis, Daily Express

“Howard Goodall opted for jocularity and a strenuously advertised lack of snootiness… explaining unison chant, major and minor thirds and the development of the triad in ways that would have been no huge revelation to anyone actually able to play an instrument, but quite instructive to those who just like listening to them. The filming style is appealingly pared down and the musical illustrations rather beautiful.”
Tom Sutcliffe, The Independent

“Goodall lied when he said he would avoid jargon, but his history was clear, good-humoured, unsnobbish and surprising.”
Andrew Billen, The Times