“Lame doesn’t begin to describe this car-crash of a comedy.” Read on for the verdict on last night’s TV. 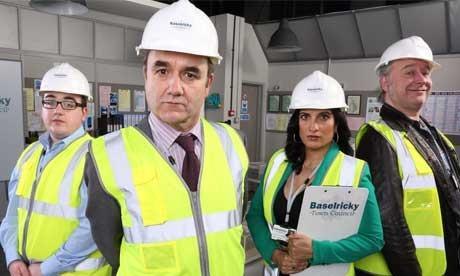 “Lame doesn’t begin to describe this car-crash of a comedy that involved actors standing around awkwardly doing their best at damage limitation… I’ve had more laughs reading a Richard Littlejohn column. The Wright Way is a sitcom that would have looked and felt badly dated in the 1970s.”
John Crace, The Guardian

“Ben Elton appears to have created his new sitcom, The Wright Way – his first for more than 10 years – by exhuming the body parts of different comedies and stitching them together. The result is an odd, lurching affair, sometimes funny but occasionally so groan-inducing that you want to gather a mob with torches and pitchforks.”
Tom Sutcliffe, The Independent

“Elton, in the Eighties, was a young stand-up who excoriated Mrs Thatcher. Now he occupies Daily Mail territory, apparently sharing its assumption that a state’s attempting to protect its citizens is either a socialist plot or a knavish European trick… Wright is not a character at all but a succession of unusable stand-up routines from a middle-aged and politically disorientated comedian.”
Andrew Billen, The Times

“If, on a progressive scriptwriting course somewhere, a tutor were to set an exercise demanding that students produce a sitcom script devoid of any trace of originality – or indeed any trace of genuine comedy – this would pass with flying colours… Even when, in the last ten minutes, the jokes go from absurdly bad to just bad, it is impossible to raise a smile even of relief. Your sense of humour had been beaten to death like a wet-eyed seal cub and you just wanted it all to end.”
Jake Wallis-Simons, The Telegraph

“The first episode revealed some delightful observations, mostly aimed at the absurdities of modern life… Gerald himself is the source of some splendid moments… Yet none of that quite compensates for the awful, squeaky voice David Haig puts on to play Gerald, or the pantomime performance of Brenda Edwards as the office cleaner, or a plot so clunkily delivered that every scene seems like a brick wall falling on your foot.”
Matt Baylis, Daily Express

“It had the appraising experts, the challenges and even the agitato strings of its model, but it lacked the warmth of nourishment, the way that baking goes absolutely to the heart of family life… Still, I imagine it’s been a treat for those who like to debate the rival virtues of the French seam or overlocked hem.”
Tom Sutcliffe, The Independent

“The lovely thing about GBSB was that it was not about the winning. This was a celebration of all those people who happily spend hours at home, sewing away without any recognition. When Ann’s daughter said that her mother would be so proud of herself if she won - to simply have her talents recognised after all these years of sewing - there was not a dry eye in the house.”
Tamsin Blanchard, The Telegraph

“The all-woman final was won by it’s oldest contest, Ann, who is 81. The programme, which is much nicer than MasterChef, to which it bears similarities, did not do runners up, but I reckon middle-aged Sandra came second and 27-year-old Lauren third. Fifty years on she will probably win, but there will be competition. Amazon UK reports that since the series launched sales of sewing machines have increase 50 per cent.”
Andrew Billen, The Times

“There was something about this story of establishment double standards and cover-ups that made this documentary feel more familiar than it should have done. Mainly because everyone involved was so unlikable, you wouldn’t have expected them to behave any differently. A film in which Edward VIII is revealed to have done a lot for charity and had declined to sleep with a friend’s wife… Now, that would be eye-opening.”
John Crace, The Guardian

Keeping Britain Alive: The NHS in a Day, BBC2

“Keeping Britain Alive continues to be required and rewarding viewing for those of us who use television as a form of self-diagnosis, though it did momentarily lapse into overfamiliarity. I have seen so many tricky brain operations in programmes this year that I think I’d have a reasonable chance of performing one or two myself by now.”
John Crace, The Guardian