“Toast of London just gets funnier and funnier as it goes.” Read on for the verdict on last night’s TV. 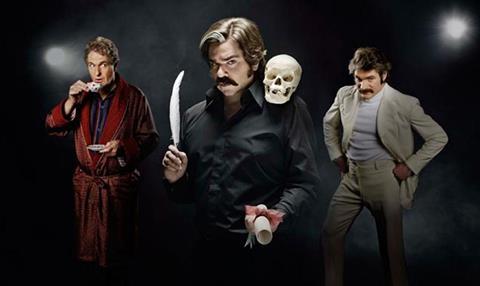 “Toast of London just gets funnier and funnier as it goes… They have created a monster, a fabulous thespian one. The whole thing is of great imagination and surreality.”
Sam Wollaston, The Guardian

“While the ‘sit’ was traditional, the ‘com’ definitely wasn’t… With the help of co-writer, Father Ted’s Arthur Mathews, Matt Berry hasn’t had to restrain his imagination.”
Ellen E Jones, The Independent

“Like Nigel Planer’s Nicholas Craig, Matt Berry’s fabulous creation is an actor’s revenge on luvvies.… Berry and co-writer Arthur Matthews’ studio comedy exists in a lunatic asylum next door but one to The IT Crowd and Father Ted.”
Andrew Billen, The Times

“The camera loves Joanna Vanderham, and The Paradise makes great use of the fact. It frames Vanderham’s innocent beauty in tableaux after tableaux, resetting her endlessly amid voluptuous textures and rich colours, deep reds, lush greens, stern black. She’s an art director’s dream, and the effect is like scoffing expensive chocolates from a Parisian (sorry, Halifax) store.”
Chris Harvey, The Telegraph

“It’s like a hybrid of The Antiques Roadshow and Extreme Hoarders… Add to that Coronation Street’s Sarah Lancashire doing a Dame Maggie, all clipped vowels and withering sarcasm, and The Paradise has a strong claim to be the campest show on TV.”
Christopher Stevens, Daily Mail

“Call me an awkward cuss but I did wonder if all this fuss over a Durham haberdashery store really was justified. I was reminded of EastEnders, where everyone seems to spend most of their time wrangling over shares in the greasy spoon and the car repair workshop as if they might be global corporations.”
Matt Baylis, Daily Express

“The Paradise is undergoing a relaunch. It should open up a food department just for its hams.”
Andrew Billen, The Times

“The supporting cast were caricatures rather than characters, the dialogue didn’t convince, the script’s swearing seemed gratuitous and jarringly jaunty music played to signal that this was all a bit ‘madcap’ and ‘wacky’. It felt more like a string of knockabout sketches than a coherent sitcom.”
Michael Hogan, The Telegraph

“Jack Donnelly, who plays the hero, Jason, does all his acting with his six-pack. He and his friends — geeky Pythagoras, played by Robert Emms, and Mark Addy’s boozy Hercules — have an impossible task matching the superb adventure serial Merlin… So far it’s like diving into an ocean that’s only two inches deep.”
Christopher Stevens, Daily Mail

“A plot in which a son murders his father and marries his mother was spun into Three Men In Togas With A Baby… Not even a hero with supernatural powers can cheer up a primordial myth about patricide and incest with a few gags about burps and stinky nappies.”
Matt Baylis, Daily Express

“The two lead characters, Brody (Damian Lewis) and Carrie (Claire Danes), are now stuck staring at the same scenery with no obvious way out, devoid of hope and anaesthetised against their will - feelings all too familiar to anybody who made it through this episode.”
Ross Jones, The Telegraph