“True Detective is as cinematic as television gets.” 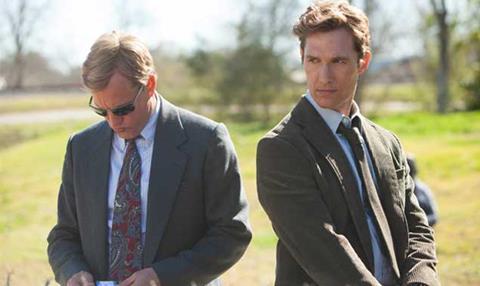 “I don’t normally like serial-killer dramas or police procedurals… but in those first five minutes there was enough writerly depth, cinematic flair and acting brilliance from Matthew McConaughey and Woody Harrelson to justify staying with it. Despite its crime genre origins, True Detective appears to be the most ambitious TV drama for a long time.”
Chris Harvey, The Telegraph

“True Detective delivers all the satisfactions of a Hollywood classic but with the additional opportunities granted by eight hours of storytelling. It is slow, hypnotic and brilliant.”
Andrew Billen, The Times

“True Detective is as cinematic as television gets. It’s not just the movie-star cast, or that it was shot on 35mm, or the soundtrack by T Bone Burnett. What makes True Detective such a distinctive piece of television is that when it ends, it ends. There will be no irritating cliffhanger to be taken up next season.”
Ellen E Jones, The Independent

“There’s the odd cliche of the genre – a pair of mismatched cops, with difficult home, drink, drugs, and more. But then TD is so smartly written (by Nic Pizzolatto) and performed, so jaw-droppingly beautiful too. Plus it’s so much more than a murder mystery.”
Sam Wollaston, The Guardian

“The Edwardian Grand Designer was a bit of a rum do based on the idea that the architect Sir Edwin Lutyens has been completely forgotten and deserves recognition once more. Except that he hasn’t been remotely forgotten: every five minutes some house he built crops up somewhere and if you Google him you get more than 430,000 hits.”
Virginia Blackburn, Daily Express

“Singer Michael Buble joined the duo on stage for the finale, performing the show tune Anything You Can Do as girls in spangles and ostrich feathers went high-kicking around them. You could be forgiven for wondering if you’d stumbled on some Seventies showbiz extravaganza hosted by Bruce Forsyth or Cliff Richard. No shocks, no surprises, just good solid entertainment.”
Christopher Stevens, Daily Mail

“I am a big fan of Casualty and have no wish to see it consigned to history but my advice would be to use fewer children and fewer storylines per episode. Oh, and get a cliché-checker in.”
Virginia Blackburn , Daily Express