“It has enough colourful costumes, large-scale battles and exotic harem-set scenes to make it one of Channel 5’s most promising acquisitions since Gotham.” 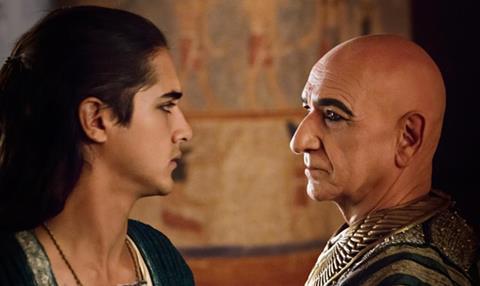 “Having Oscar winner Ben Kingsley on board doesn’t give Tut the gravitas the makers would have hoped. It’s still tosh. But it’s quite jolly tosh, if you like dastardly scheming, big battles, steel-on-steel action, and a bit of hottie-on-hottie soft-porn.”
Sam Wollaston, The Guardian

“Tut isn’t quite as spectacular as the DeMille/Mankiewicz epics of yore, but it still has enough colourful costumes, large-scale battles and exotic harem-set scenes to make it one of Channel 5’s most promising acquisitions since Gotham.”
Ellen E Jones, The Independent

“The final two episodes weren’t the best, but overall it’s been a triumph. It is science fiction that appeals also to the non-sci-fi fan; that asks interesting questions about technology and the increasingly unclear line between man and machine. Plus it’s a cracking pacy thriller, with a fabulous look, a chilling soundtrack, and lots of fine performances.”
Sam Wollaston, The Guardian

“The series’ slow-burning pace built beautifully towards its bittersweet climax – and it was touchingly tender, full of sad farewells, maternal embraces and romantic reunions. But it also neatly teed up the second series. If only all finales were this satisfying.”
Michael Hogan, The Telegraph

“Did this mind-bonding exercise, like so many other low-tech moments in the story, not resemble a Doctor Who episode when the budget had run out? The moments that really worked were the sic-fi ones — the stuttering verbal malfunctions of the androids — but the script was parsimonious with them.”
Andrew Billen, The Times

“This might be featherlight fare but sometimes handsomely produced historical fun is just the ticket for a Sunday night. Partners in Crime’s impressive ratings suggest it will tide plenty of us over until Downton’s return this autumn. Jolly good show.”
Michael Hogan, The Telegraph

“This three-part adventure stays too close to its source. Tommy and Tuppence barely saw each other, and when they did it was all wordy explanations and plot updates. The chemistry between the two never got a chance to spark. All very frustrating.”
Christopher Stevens, Daily Mail

“The presence of camp, stand-up turns this average nature show into a very weird beast indeed The assorted nature lovers with whom Julian hung out responded to his routine varyingly with bewilderment, embarrassment and joy. I shared the bewilderment.”
Matt Baylis, Daily Express

“The art of bawdy humour is to convey the joke with nothing but a leer in the voice or a glint in the eye. And Julian Clary does it so well that he was able to get away with his outrageous Nature Nuts at seven o’clock on a Sunday evening.”
Christopher Stevens, Daily Mail