“This was a one-off drama. Thankfully, there’ll be no sequel.” 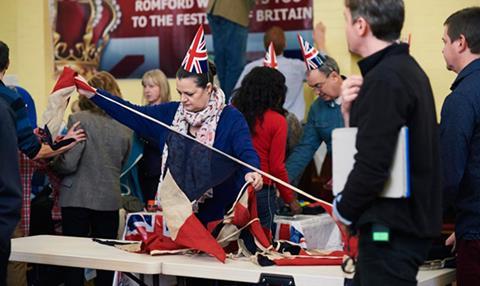 “Atkins’ film always plumped for plausibility over the obvious gag, meaning Ukip were portrayed as a serious electoral prospect. If it had more of The Thick of It’s sneer, it might have been funnier, but it would also have been less effective at the job in hand – scaring the bejesus out of mainstream voters.”
Ellen E Jones, The Independent

“This certainly was apocalyptical, both in terms of the depth of gloom it imagined and how sickeningly authentic it sometimes felt. However, ultimately everything was laid on so thick that it felt not only overmanipulative but also incredibly mawkish, especially in the closing twists. A promising idea tipped from docudrama into docusoap and left me wondering who this was made for.”
Alex Hardy, The Times

“For a minute or two, it looked like this was going to be fun. The rest of the drama was grimly humourless. This was a one-off drama. Thankfully, there’ll be no sequel.”
Christopher Stevens, Daily Mail

“What could have been a nuanced look at a British political phenomenon, ends up not just pat, but feeling like a giant pat on the head. It won’t aid Ukip’s cause in the run up to the election, but it probably won’t make much of a dent in it either.”
Julia Raeside, The Guardian

“As a mixture of satire and political dystopian fiction, Ukip: the First 100 Days often worked. Atkins playfully sent up the banality of politicians’ imploring rhetoric. However, it made one fatal error. The white working class, the disenfranchised section of society that Farage has courted, were reduced to an unruly, stereotyped mob, an army of bald-headed, beer-swilling thugs.”
Ben Lawrence, The Telegraph

“Unfortunately it’s not just the plotline that has let this second series down, but the dialogue too. After Claire and Lee finally part ways, her best riposte to a man who has emotionally abused her is ‘you’re so stupid.’”
Daisy Wyatt, The Independent

“Is this Broadchurch we’re watching or a sort of Grand Designs for the homeless? Still, besides a few new subplots this penultimate episode contained less nonsense than other recent instalments. I at least want to watch next week’s finale, which is more than I could have said a few weeks ago.”
Alex Hardy, The Times

“The second series of Broadchurch should have been rebranded, just to give us fair warning. Maybe they could have called it Broadchurch II: Wrecking The Legacy, or How To Spoil A Classic In Eight Episodes. If Joe is freed, we face the appalling prospect of a third series, with everyone standing on the skyline looking either furious or furtive — the two default emotions in Broadchurch. We’ll have to wait till next week to hear our fate.”
Christopher Stevens, Daily Mail

“I loved the first series of Broadchurch because it was an unpretentious whodunit. Now, it’s weighted with an enigmatic hauteur that makes it hard to care about. Still, it may not be too late.”
Ben Lawrence, The Telegraph

“Slow, quiet and sad was very much the order of the day on this week’s instalment of The Walking Dead – albeit slow, quiet and sad interspersed with bursts of frenzied zombie killing. While the slow, meandering pace felt suited to an episode wrestling with big questions and big emotions, it was nonetheless refreshing when, in the last five minutes, we were given an indication that the show is returning to a more plot-driven formula.”
Rebecca Hawkes, The Telegraph

“There are moments in this week’s tale where you cannot much tell the difference between the human survivors and the zombies. Such is the pace of ‘Them’, which features some fine moments but ultimately lacks the energy and excitement of last week’s story.”
Alex Straker, The Independent

“This coolly confident comedy-drama is smartly scripted and strikingly styled. Better Call Saul has hit the ground running and already become one of the best shows on TV – even if it’s not on TV in the traditional sense. A worthy prequel to Breaking Bad. Perhaps lightning can strike twice in the same place after all.”
Michael Hogan, The Telegraph

“Tony Singh’s tour of the Punjab in northern India set the bar pretty high. By contrast, John Torode’s Argentine trip was a resounding belly-flop. Someone must have sensed how boring things were because at regular intervals Torode kept making awkward speeches about how amazing it all was.”
Matt Baylis, Daily Express