“This was slack drama, and with such a cast that’s a travesty.” 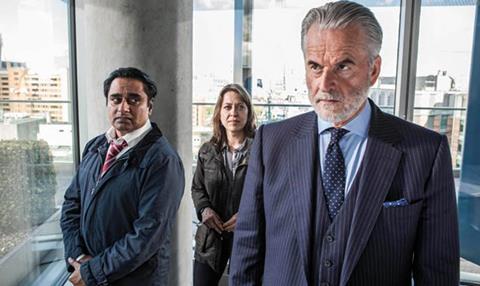 The first episode, though a whirl of divergent plots, was engrossing and full of promise. The second crashed with no pace and no progress. If you didn’t catch the second part but still want to persevere with Unforgotten, you’ve missed nothing. This was slack drama, and with such a cast that’s a travesty.”
Christopher Stevens, Daily Mail

“In its plotting, Unforgotten shares some of Broadchurch’s irritating desperation to keep the viewer guessing but there is also something pretty taut and complex at work. There may be a few rough patches in the script, but the acting carries you right over them.”
Tim Dowling, The Guardian

“Cassie is played with such lightness yet such presence by Nicola Walker, and Sunil by the revelatory Sanjeev Bhaskar. Their problems are not the usual torments of television detectives: booze and cynicism. On the job they show the one quality so rarely seen in police procedurals, empathy.”
Andrew Billen, The Times

“This second episode carefully paid out just enough story while making us care intensely about the 40-year-old case at its heart. I did however experience a flicker of panic at the scene where young Curtis was harangued by a pair of hoodlums as he headed off on his way to school. No self-respecting teenage gangster gets up before midday.”
Matt Baylis, Daily Express

“Lord Sugar rightly fired Aisha. Yet it is the men who make this season so hard to stomach. Uneducated and ineducable, their ties wide-knotted Premier League style, defeated by simple sentence construction, yet testosterone-pumped with self-esteem, they scrape the bottom of the barrel, with their knuckles.”
Andrew Billen, The Times

“To screen one episode of The Apprentice a week is subjecting BBC viewers to unwanted trash; to do it twice is the television equivalent of spam email. It confirmed everything we knew from Wednesday’s opener. There’s no entertainment value in these moronic young acolytes.”
Christopher Stevens, Daily Mail

“If you have long believed that the one thing Britain’s annual harvest lacked was a few smiling presenters looking on and effectively giving the whole notion of reaping what you sow a big thumbs-up, then this was the agricultural showcase for you. We’re so removed from agriculture that it has become oddly fascinating, like watching people farm on Mars.”
Tim Dowling, The Guardian

“The Russell Brand-style ‘smash the system’ stuff could have tipped over into irritating student whineyness if the story hadn’t been so witty and pacy. Packed with twists, intrigue and in-jokes, Mr Robot made most other dramas look pedestrian and positively prehistoric.”
Michael Hogan, The Telegraph