“This is a parody from telly people with a deep grudge against Eighties TV.” Read on for the verdict on last night’s TV. 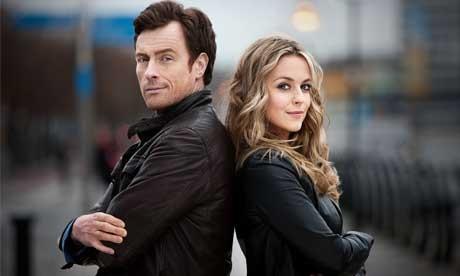 “There is nothing intrinsically wrong with a comedy police drama set in the present day but with a retro 70s feel: but there are two necessary criteria to make it work. It must be funny and it must be drama.”
John Crace, The Guardian

“This is a parody from telly people with a deep grudge against Eighties TV.”
Andrew Billen, The Times

“Die-hard DIYers might appreciate the absence of Grand Designs’ gameshow tendencies, but for the rather less dedicated it is a distinct disadvantage.”
John Crace, The Guardian

“Ben looked exceptionally stupid doing a piece to camera with carrots and potatoes Sellotaped to his face, but then perfectly respectable broadcasters have done worse things in the name of education.”
Tom Sutcliffe, The Independent

“The BBC commentary on the Olympics is a daily cornucopia of hastily assumed authority and wild jingoism.”
Tom Sutcliffe, The Independent