“Ms Wood was the perfect host for this journey through the turbulent history of tea leaves.” Read on for the verdict on last night’s TV. 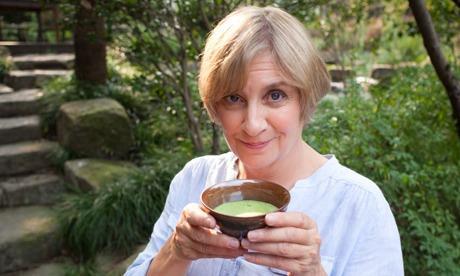 “What raised it above the mundane was Wood herself… In someone else’s hands, this would have been tedious. But Wood was delightfully subversive, talking to the camera as if she couldn’t quite understand why she was being made to go up yet another hill to look at some tea plants that looked the same as all the others.”
John Crace, The Guardian

“The great things about Wood are that she doesn’t labour her points, she doesn’t throw her hands around in the air (where do they teach that?), and she’s genuinely funny. I loved her description of the Shanghai restaurateur serving her tea-flavoured vegetables as ‘the love child of Mary Quant and a Bond villain’. Somehow, Wood managed to make it not sound cruel, and when the lady in question stood revealed, I burst out laughing in recognition.”
Gerard Gilbert, The Independent

“The first part of Victoria Wood’s documentary about tea was saved from being quite as vacuous as most celebrity travelogues through a sprinkling of genuinely interesting facts and just enough lines to laugh at… If the programme wasn’t pitched at the most sophisticated level, Wood’s presence, frequently self-deprecating, always warm, was a pleasure throughout.”
Serena Davies, The Telegraph

“Being a woman whose very name conjures up images of steaming mugs and digestive biscuits. Ms Wood was the perfect host for this journey through the turbulent history of tea leaves… But Ms Wood’s account sometimes skidded off the rails as it moved from China to India.… A sneering tone crept in as the narrative described British efforts to grow tea in India, one so at odds with the previous section that it felt plonked in, hastily, like an unwanted slice of lemon in a mug of milky PG Tips, to satisfy some obscure agenda.”
Matt Baylis, Daily Express

“It did, at times, feel as if it was just going through the motions a bit. As if everyone involved knew they had their audience in their pocket and felt no need to raise their game… Part of the pleasure of the early seasons of Mad Men lay in their attention to detail. Everything felt authentic to the period. Now that we’ve reached the late 60s it feels more like a series that is replicating an era rather than living it. Ah well. It’s a small quibble and Mad Men is still superior viewing.”
John Crace, The Guardian

“The opening double bill seemed to be coasting, giving us barely an event to chew on, and offering grist to the mill for those who say it is dull… I’m a Mad Men fan, so was disappointed by this start. We need to be shown something more than Don yet again pondering who he is. But I have sufficient faith in [creator Matthew] Weiner’s intelligence to believe that he will achieve this.”
Serena Davies, The Telegraph

“A second viewing always helps to show just how exquisitely written Mad Men is, even if Weiner’s noticeable pretensions to high art mean the Don-looking-deep moments are becoming rather well-worn. Other dramas motor along on surface twists and dilemmas, but Mad Men has a way of immersing you in its bleak view of the human condition. Somehow it sees to the bottom of the pond.”
James Jackson, The Times

“I’ve got more than a soft spot for this programme, as everything about what it means to be human – love, loss, kindness, hate, brilliance, stupidity – is here.”
John Crace, The Guardian

“As well as making us admire the wonders of the British coastline, series after series of this history-cum-nature hotchpotch of a programme showcases the inventiveness of TV producers. Year on year they keep rejigging Coast and, with the exception of that one crazy interval where they started doing other people’s coastlines, it sort of keeps on working.”
Matt Baylis, Daily Express