TV Critics: Victorian Bakers; Tricks of the Restaurant Trade; You Make Me Feel Like Dancing

“It was in every way the perfect BBC2 factual programme: full of substance, educational and accessible for all.” 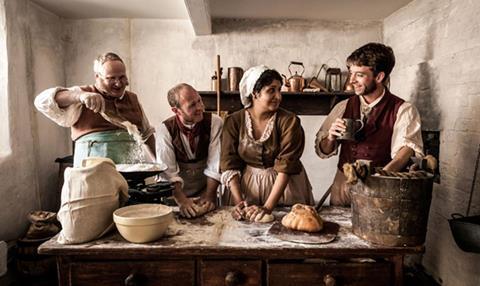 “It was in every way the perfect BBC2 factual programme: full of substance, educational and accessible for all. But Victorian Bakers was too much of a cookie cut-out to be a real indulgence. A bad Mel and Sue joke would have gone down a treat.”
Daisy Wyatt, The Independent

“I would never have said this in the pre-Bake Off era, but it was actually interesting to see how traditional ovens were heated from the inside by blazing firewood, with the ashes raked out before the loaves went in. And there was satisfaction in seeing the bakers knead enormous slabs of dough, in troughs the size of a single bed, with yeast made from skimming the foam off beer.”
Christopher Stevens, Daily Mail

“What with baking being the new gardening and all sorts of new opportunities for people to bore one another by going on about sourdough, the time is surely right for such a programme. Rather than just being the right roll for the lunchbox, this is an interesting bit of lived-out history programming.”
Matt Baylis, Daily Express

Tricks of the Restaurant Trade, Channel 4

“Tricks of the Restaurant Trade would be useful if you had never been to a restaurant or were stupid. Times readers, however, know the worst value bottle is second on the wine list, that waiters are paid to ‘upsell’ and that the burger beef in Byron is better than the beef in McDonald’s. The programme had one great asset, however: the personable reporter-comedian Adam Pearson.”
Andrew Billen, The Times

“Some parts are less surprising than other parts. So a £9 burger from a gourmet place is made from a better, more expensive cut of beef than, say, a 99p burger from a well-known fast food chain. Perhaps more surprising/interesting is that the expensive one is more likely to kill you – if you order it fashionably pink.”
Sam Wollaston, The Guardian

“None of these purported secrets amounted to much more than common sense. This series makes the mistake of supposing we’ll watch anything to do with food, no matter how banal, and that isn’t strictly true.”
Christopher Stevens, Daily Mail

“Choreographer Jack Murphy is no Gareth Malone, I’m afraid. He adds hissy fits and a bit of histrionics to the history of dance, but when Margot’s new fella goes off in a huff, Jack spectacularly fails to get him back. Barely even tries. Gareth would have had Joe not just back but back twerking. Uninspiring.”
Sam Wollaston, The Guardian

“What was really admirable — and made the programme such fun — was the resistance by the survivors of the Fifties dance craze. With them Murphy could hardly put a step right. Gareth Malone has no common touch at all and people will do anything for him because he is himself. Murphy’s common touch is veiled in camp and Bolton bristled at it.”
Andrew Billen, The Times

“Key to the success of any TV show is a clear sense of purpose. You Make Me Feel Like Dancing had a premise, but no obvious purpose. A more competent – or perhaps just generous – production team would have instilled or even invented the show’s missing sense of purpose, and steered Murphy properly rather than constantly flagging up his blunders.”
Gerard O’Donovan, The Telegraph