“Despite the sometimes cheesy ‘dress-up’ side to this series, there were some truly fascinating glimpses of social history.” Read on for the verdict on last night’s TV. 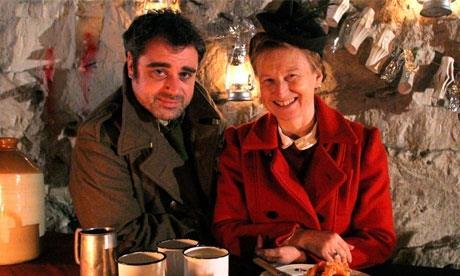 “It was a vastly informative hour which teetered, only, on making the whole Second World War thing sound quite fun in a Five Go Mad In Chislehurst sort of way.”
Andrew Billen, The Times

“Some of the re-enactment looked laboured but gained momentum as time went on with [historian Ruth] Goodman making a Christmas meal at the most austere stage of rationing (carrot cakes, candied carrots, boiled carrots etc), and chidren’s toys out of household detritus while [archaeologist Peter] Ginn made beer out of potatoes… Despite the sometimes cheesy ‘dress-up’ side to this series, there were some truly fascinating glimpses of social history.”
Arifa Akbar, The Independent

“I’m not sure about the carrot ‘fudge’ (grated carrot in gelatine), but the baked rabbit with a celery and parsley stuffing looks delish. There’s even a mug of potato beer (mmmm) to wash it down. And lashings of Blitz spirit, of course.”
Sam Wollaston, The Guardian

“Bourne came across as a thoroughly nice man with none of the hauteur that can come with the territory. There was a warm, down-to-earth solidity in his exchanges with Yentob. The documentary closed as the show began its run at Sadler’s Wells and even the newly initiated must have been itching to see it by then.”
Arifa Akbar, The Independent

“Without the contestants and the tears and Mel’n’Sue doing silly gags, these Bake Off Masterclasses are as dry as old raisins. Mary Berry can soak them – as well as herself – in as much brandy as she likes, but they’re still raisins. I don’t like raisins, or currants, or sultanas, of which they are many in this show.”
Sam Wollaston, The Guardian

Omens Of The Apocalypse, National Geographic

“The programme was better than it sounded, becoming an examination of how humans over-interpret patterns of coincidences.”
Andrew Billen, The Times

“A lot of people admire this work because of its casting. When was the last time we saw the splendid Derek Jacobi doing something that didn’t require a toga? I also respect it for depicting the North I know and grew up in rather than the tarty, fake-tanned, burlesque Blackpool you see reproduced in other dramas. More than that though, it’s an honest story about people and the way they behave… This is real stuff and I’d happily watch it three times a week.”
Matt Baylis, Daily Express