“A sickeningly sugary and sycophantic hour of self-important celebrity toss.” 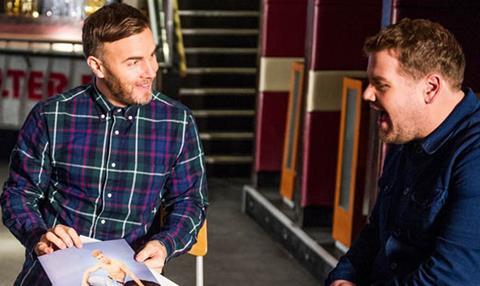 “If you chose to watch When Corden Met Barlow you will have suffered a sickeningly sugary and sycophantic hour of self-important celebrity toss.”
Sam Wollaston, The Guardian

“This hagiographic film was all a bit ITV. An hour-long advert for why Barlow deserves a knighthood, while Corden gazed on adoringly.”
Michael Hogan, The Telegraph

“There were a few nauseatingly obsequious observations from Corden but he also confronted Barlow with some genuinely unpleasant flashbacks. Barlow’s story is one of the best in pop music and there’s no doubt that Corden has the hard-earned empathy to tease it out.”
Ellen E Jones, The Independent

“The road trip was a feeblish pretext for a straightforward promo documentary, retelling the Take That story and setting up a sell-out solo tour. It would have been good to have a bit more music — and a lot less of a starstruck comedian singing along.”
Christopher Stevens, Daily Mail

The Island With Bear Grylls, Channel 4

“It’s about as close as television has got to Lord of the Flies, and it’s absolutely fascinating because of it.”
Sam Wollaston, The Guardian

“It’s not half bad actually, largely because apart from dumping the Matts and Sams and Bens and Dans on an island, very little engineering seems to have gone on. This is reality TV that actually makes you think.”
Matt Baylis, Daily Express

“The show is far from Lord of the Flies for now: in fact this first was so light on lessons that it sometimes appeared as little more than a dating video for Sam, in the Dishy Doctor role.”
Alex Hardy, The Times

“Prey doesn’t know whether it wants to be a repeat of Line Of Duty, with its legions of corrupt coppers, or a pell-mell remake of the Sixties classic the Fugitive. As a result, it fails to be nearly as good as either.”
Christopher Stevens, Daily Mail

“John Simm as wronged cop Marcus Farrow is having a few too many escapes for my liking. He’s lived the lives of an entire cattery as he’s ducked in and out of traffic and beaten armed raids with little more than a pair of glasses for cover. But there’s still real impact in each of those blows and dodges.”
Alex Hardy, The Times