A Perfect Planet; The Serpent; The Great

“The cinematography is as awesome in scale and majesty as anything that has gone before.” 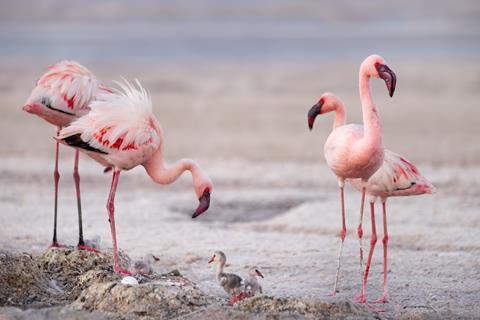 “Attenborough’s distinctive, much-mimicked, slightly breathless voice helps make A Perfect Planet a near-perfect programme. The cinematography is as awesome in scale and majesty as anything that has gone before, capturing both vast panoramas of tropical atolls and the tiniest wrinkly detail of a giant tortoise’s backside.”
Sean O’Grady, The Independent

“The marabou storks patrolling the landscape like evil, dead-eyed Dickensian headmasters, casually butchering flamingo chicks with their Roman-sword beaks, was the stuff of nightmares. Normally it’s the hyenas that horrify the most. It was stunning though, wasn’t it? The flamingo migration scenes alone were a work of art.”
Carol Midgley, The Times

“Sweeping drone shots of flamingos on a Tanzanian salt lake? Seen it. Wildebeest being stalked on the Serengeti? Standard fare. Bears catching salmon? So familiar that they sent it up on a John West advert. A Perfect Planet gave us all of these. But the quality of the photography was so exquisite, and the narration so spare and intelligent, that it was still required viewing. If only school geography lessons were this awe-inspiring, we would have generations of mini-Attenboroughs on our hands.”
Anita Singh, The Telegraph

“The flamingo sequence, the highlight of the opening episode, was kaleidoscopically beautiful. Also outstanding were the shots of hundreds of brown bears on Russia’s Kamchatka peninsula, gorging on salmon while boiling geysers burst up from the rocks.”
Christopher Stevens, Daily Mail

“It is excellent at conjuring up an atmosphere, although sometimes at the cost of the story. The heat, the booze and the curfews, the smoking, the sideburns and the suits all come together to cook up a vivid picture of the idealism of those still pursuing the hippie dream well into the sour 70s, and the viciousness with which Sobhraj manipulates and cuts through it. I am not sure, though, that The Serpent had much else to say. It looks the part, and pulls the right strings, but, in the end, it left me a little cold.”
Rebecca Nicholson, The Guardian

“The problem with The Serpent is that it is a whodunit where we already know who did it. The strength of the drama instead flowed from its evocation of the Bangkok of half a century ago. The thrill of the tourist trail was rivetingly recreated.”
Ed Power, The Telegraph

“The production certainly looked the part, stylishly capturing a time when young Europeans and Americans could ‘find themselves’ among the materially poorer but supposedly spiritually richer Asians. But whether the whole thing was too unremittingly queasy for New Year’s Day, when we’re more used to the larkiness of Sherlock or Dracula, only episode two’s viewing figures will tell.”
Gerard Gilbert, The i

“Missing a minute of The Serpent is dangerous because you’ll lose your place in its timeline. The narrative sways like a pendulum from the end of the story… to the start … to four months later… to two months earlier. Its effect is like the moment psychopathic jewel dealer Alain (Tahar Rahim) scatters a bag of gemstone fragments across a desktop. It’s dazzling and fascinating but you hardly know where to look.”
Christopher Stevens, Daily Mail

“I imagine the historical romp The Great is something you love or hate. Despite early reservations, I’m in camp one. This is down to Tony McNamara’s fizzing, filthy script, which moves at 100mph with punchy lines every few minutes. It’s light-hearted and funny, and right now that’s no bad thing.”
Carol Midgley, The Times

“Peter is played with a glorious sense of absurdity by Nicholas Hoult as an overgrown schoolboy whose temper tantrums can have very dangerous consequences, what with him being the most powerful man in the land. It’s a great comic turn and the one thing that will keep you watching. The Great would have worked well in tart half-hour bites but its hour-long episodes feel a bit much, packed as they are with intrigue, indulgence and sleaze.”
Anita Singh, The Telegraph

“At roughly 50 minutes each, episodes run long for a comedy; its sharply cruel sense of humour may have worked better in shorter bursts. But The Great is timely TV, maybe self-consciously so. Rumbling underneath its dissonant mix of history and modernity, there are some keen observations about men, women, and power. Often ugly but sometimes hopeful, they are as true now as they ever were.”
Louis Chilton, The Independent

“If you don’t care a stuff about historical accuracy, and your idea of a rounded character is one cut from the back of a cereal packet, there is certainly lots here to entertain the eye. It’s an extraordinary tale, and one that has been retold many times. But writer Tony McNamara made a deliberate decision to discard all that. Every minute of this dross was a struggle.”
Christopher Stevens, Daily Mail