“In a world in which the margins of fairness and kindness are being so tightly squeezed, it felt like a dismal hour in a time already full of them” 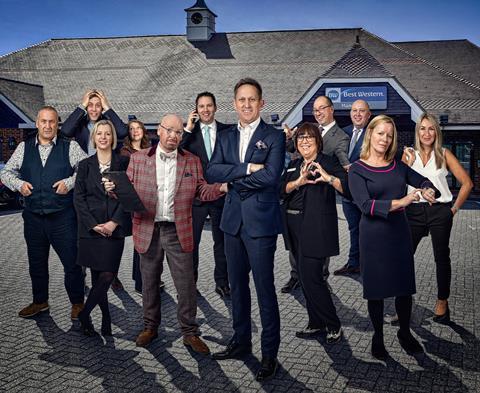 “Perhaps it is impossible to make a documentary about anyone or any kind of setting that reminds us of The Office, which held unglamorous lives up to such pitiless scrutiny, or to aim (as A Very British Hotel Chain might have been trying) for an Alan Bennett/Victoria Wood warmth when dealing with nonfictional characters. Or perhaps I am just being hugely oversensitive and ridiculous. But in a world in which the margins of fairness and kindness are being so tightly squeezed, A Very British Hotel Chain felt like a dismal hour in a time already full of them.”
Lucy Mangan, The Guardian

“Despite the winking, comedic tone of the programme (the intro was even set to the strains of Jerusalem), what I took away was the impressive pride that the staff took in their work. The acquisitions boss, Terii, even managed to charm Marco “there’s nothing wrong with a bit of narcissism” Pierre White, and I imagine that takes some doing.”
James Jackson, The Times

“Presumably Best Western thought three-part series A Very British Hotel Chain: Inside Best Western would be a handy publicity booster for their 265 hotels, with its portraits of the wacky but lovable workforce and the inevitable chortlesome voice-over. But thanks to Covid-19 it now looks more like a message in a bottle, washed up from some long-submerged civilisation.”
Adam Sweeting, The i

“What the documentary didn’t manage was to explain what Best Western actually does, and what the benefits are in joining their ‘crazy family’. According to comic Diane Morgan’s voiceover, sounding as well-informed as her gormless character, Philomena Cunk, in Charlie Booker’s Weekly Wipe, the role of Best Western is to ‘push bookings to the hotels and enforce brand standards’.”
Christopher Stevens, Daily Mail

“The trainers market even has its own stock exchange. These objects of desire have become collectible in the same way that people collect art. Except the target demographic is not wealthy middle-aged aesthetes, but Generation Z. Lynnie Zonzolo, the 26-year-old presenter of this boldly concise report (20 minutes long, despite her travelling from New York to Germany to Loughborough), admits that she owns 80 pairs worth £30,000-£40,000 and still wants more. “Do I need all the sneakers I’ve got?” she wondered. “Probably not.” Probably?”
James Jackson, The Times

The Architecture The Railways Built, Yesterday

“The programme came alive with a portrait of Victorian financier George Hudson, whose vision for the railways got the better of him. Despite making millions, the Railway King could not resist fleecing his investors. When his frauds were exposed he was declared bankrupt. More about Hudson and less about renovations would have made for a better episode.”
Christopher Stevens, Daily Mail