Depression and Me; Good Omens; Rhythms of India; Hot Property

“Seeing Campbell explain his experience to camera was a startling, necessary glimpse of the reality of how depression can descend so fast” 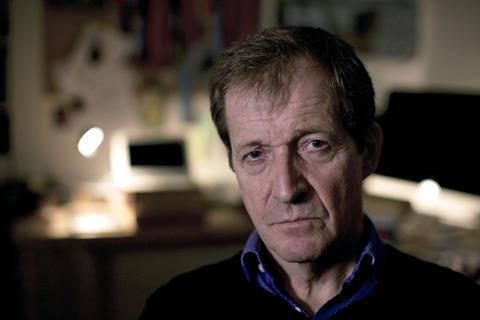 Alastair Campbell: Depression and Me, BBC2

“Seeing Campbell explain his experience to camera, while mid-crash, was a startling, necessary glimpse of the reality of how depression can descend so fast. He was commendably self-exposing throughout, although I found his personal recollections more intriguing than his TV journey through the latest therapies, now the standard form for such documentaries.”
James Jackson, The Times

“Combined with heavily signposted comic beats, the storybook narration has an unfortunate effect on the overall tone; it often plays like a children’s programme, though it’s not billed as one. Salvation comes from the comic chemistry between the show’s pair of scenery-chewing stars, David Tennant and Michael Sheen. It’s a real treat watching two serious actors try to out-ham each other; together, they’re enough reason to return for another episode, but only just.”
Tristram Fane Saunders, The Telegraph

“Only on BBC4 would you get an ethnomusical travelogue taking in the evolving sociopolitical shades within Hindustani and Carnatic music. My only quibble was that this rich, illuminating hour became a few too many interviews stringed together. The music was so mesmeric you wanted to hear more — a little less conversation, a little more sarod please.”
James Jackson, The Times

“Hot Property is television for phones, and it is geared towards YouTube attention spans. It is quick, anonymous and slightly intrusive. But when the people are good value, it’s strangely hypnotic and educational.”
Rebecca Nicholson, The Guardian

“One of the pleasures of this observational documentary is realising how much entertainment people can squeeze out of their daily toil. It was good to see the banter between the firearms officers, and the excitement of ‘customer experience manager’ Demi on sighting Hollywood sci-fi actress Sigourney Weaver at the check-in desk.”
Christopher Stevens, Daily Mail