All Together Now; Chris Packham: In Search of the Lost Girl

“Feelgood fun, if not the answer to the BBC’s prime-time prayers” 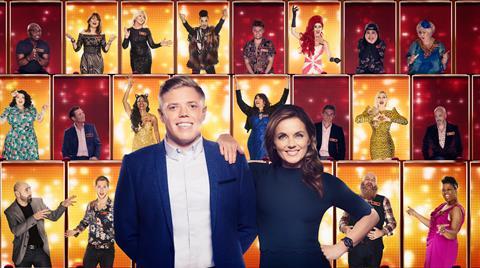 All Together Now, BBC1

“It’s kind of like a pub singalong meets Celebrity Squares. I quite enjoyed it. It doesn’t take itself too seriously. There are no promises of stardom; just a bit of a laugh, and 50 grand to the winner. And it’s nice to be able to easily work out how well someone’s done, as a percentage.”
Sam Wollaston, The Guardian

“With The Voice having moved to ITV, it’s clear the BBC is looking for a new show to capture the nation’s imagination before Strictly… comes back. They may well have found it. As head judge/MC, Geri Horner generates enough positivity to power a small town but co-presenter Rob Beckett brings a nicely acerbic vibe to counter the showbiz excesses.”
Jeff Robson, The i

“If you didn’t catch All Together Now, BBC1’s new ‘singing contest with a twist’ then, sincerely, lucky you. I haven’t seen such toe-curling, ‘make it stop’ TV since Len Goodman’s Partners in Rhyme. Whoever thought of having 100 judges deserves to be tied to a chair and forced to watch both shows on a loop. For a week.”
Carol Midgley, The Times

“Much like The Voice, the show’s central gimmick was neat but it’s hard to see how it will maintain interest once the novelty wears off. Still, this opener had the decency not to outstay it welcome, clocking in at a tolerable hour, rather than the two-hour-plus feats of endurance to which such shows often subject us. Feelgood fun, if not the answer to the BBC’s prime-time prayers.”
Michael Hogan, The Telegraph

“Every song, whether it’s pop, West End musical or even opera, ends up sounding the same — middle-of-the-road karaoke, bordering on the football chant. Everybody pretends to be having a wonderful time, but between songs the show drags terribly, with forced conversation and scripted asides.”
Christopher Stevens, Daily Mail

Chris Packham: In Search of the Lost Girl, BBC2

“Like Chris’s Asperger’s documentary, this is an intense, personal, moving, important film.”
Sam Wollaston, The Guardian

“Moonlighting from his usual job Packham made one of last year’s outstanding documentaries, Asperger’s and Me. This one wasn’t quite to the same standard but was still a fine, heartfelt piece of film-making.”
Michael Hogan, The Telegraph

“Chris Packham: In Search of the Lost Girl was another heartfelt documentary from the wildlife presenter. It was often (rightly) uncomfortable viewing. But there were moments of hope and humour.”
Jeff Robson, The i