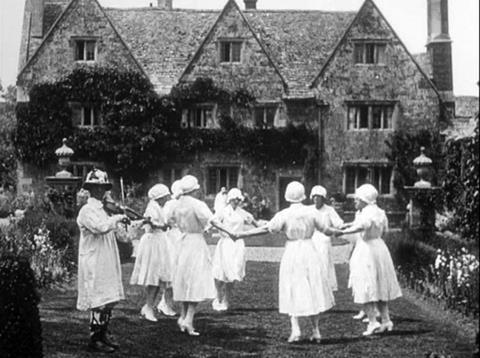 “Paul Wright’s Arcadia was one of those films that you might benefit from watching while ever so slightly drunk. It had a dream-like, hallucinatory quality and no narration, being a jerky, free-form, kaleidoscopic collage of 100 years of British archive footage tracking humans’ relationship with the land. It was variously beautiful, eerie, breathtaking, clichéd, eccentric and bizarre.”
Carol Midgley, The Times

“Framing the British countryside as a land of both sinister savagery and bucolic idyll is not new, but Wright’s rhapsodic montages nurtured rural traditions while picking away at them. At once a celebration and elegy, warning and fairy tale, this was a striking, troubling and above all intoxicating film.”
Gabriel Tate, The Telegraph

“There was more naked cavorting than I remember from personal experience of ye olde Britain, making me wonder if a researcher accidentally uploaded some German naturist archive. Thankfully, beguiling clips of white-collar workers in tweeds daintily folk dancing outside a Kent pub proved a clothed corrective.”
Stuart Jeffries, The Guardian

“As usual it was cheerful comfort-blanket nonsense, all highly implausible, but cleverly themed. Neil Dudgeon always does a capable job as DCI John Barnaby, but there is no point looking for any profound moral message in a Midsomer storyline; it is pure, depthless escapism, a quick coffee-break crossword.”
Carol Midgley, The Times

“Far-fetched it may be, not to mention callous. But you can’t say that Midsomer Murders is ever less than psychotically imaginative. What other mainstream show could do a light-hearted gag about cannibalism without provoking an outcry?”
Christopher Stevens, Daily Mail

“The script for last night’s episode The Ghost of Causton Abbey felt a little sharper, the mysteries a tad more inventive and the gambits a touch bolder than in the past.”
Gabriel Tate, The Telegraph

“Another richly entertaining caper, full of mid-Eighties pop culture, again tinged with Cold War dread. The leads proved as easy to root for as ever, and the story in which they were entangled felt genuinely fresh. It was an aesthetic treat, with a winning guilelessness that made the sometimes chewy politics slip down easily; would that more shows were this ambitious and mischievous.”
Gabriel Tate, The Telegraph

“Anna and Jörg Winger’s 10-part sequel is as geopolitically fascinating as The Americans, the contemporaneous drama about two KGB agents subverting the US from within – and sartorially more compelling.”
Stuart Jeffries, The Guardian