“Army: Behind the New Frontlines offered something different; less visceral, but no less revealing or insightful.” 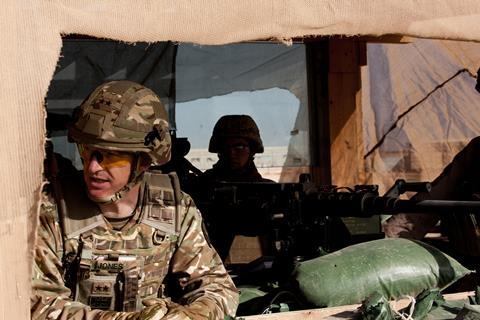 Army: Behind the New Frontlines, BBC2

“The BBC’s thrilling Our War covered the conflict in Afghanistan with terrifying immediacy. Army: Behind the New Frontlines offered something different; less visceral, but no less revealing or insightful, reflecting the new realities for an army facing tight budgets and representing a nation broadly opposed to military intervention.”
Gabriel Tate, The Times

“Fly-on-the-wall documentaries about the British Army in Afghanistan had become a regular TV schedule staple. Army: Behind the New Frontlines is a sort of sequel, explaining what our boys did next. As ever with programmes organised via the Ministry of Defence, there was an aura of media management.”
Jasper Rees, The Telegraph

“The army now finds itself employed mainly in teaching others how to fight. Through the prism of the battle for Mosul, the film drew out the strategic, tactical and psychological aspects of this new role. Soldiers are suddenly dealing not just in orchestrating operations but in Jesuitical niceties.”
Lucy Mangan, The Guardian

“There was something heartbreakingly vulnerable about this Dad’s Army of ordinary men, barely with enough weapons among them, trying to become military professionals, prepared to stem the deathly flow of Isis suicide bombers driving cars laden with explosives into the city of Mosul.”
Bernadette McNulty, The i

“Throughout the programme there was a certain mood, of men trained to do a certain thing and not happy at not being able to do it. When you belong to a regiment called 1 Rifles, the urge to pick up a rifle and shoot it at the enemy is one that doesn’t die away.”
Matt Baylis, Daily Express

“Presented by Matt Frei, the documentary’s thorough disentanglement of the connections and relationships between Trump, his campaign – and family – members and the former Soviet Union left you feeling as if you had been caught up in a hurricane and deposited at the end in an entirely new country.”
Lucy Mangan, The Guardian

“Despite the promise of sensation, underscored by a spy-movie soundtrack, this edition of Dispatches amounted to nothing more than a summary of what we know so far. There were plenty of journalists, spooks and henchmen from both sides of the aisle who were available for comment. But as Frei carried on digging, the list of interviewees took on the distinct whiff of D-list.”
Jasper Rees, The Telegraph

Anthony Joshua: The Fight of My Life, BBC1

“Stage management is part of modern boxing and the documentary never pretended to be more than it was — an amiable if workmanlike fly-on-the-wall account of one of British boxing’s biggest nights and nicest guys. The tight grey pants favoured by Joshua were the most revealing aspect of the film.”
Gabriel Tate, The Times

“George Clarke surely had a humanitarian duty, in Ugly House To Lovely House, to step in and restrain the couple who wanted to spend their life savings on refurbishing the abject eyesore they called home. George did gently suggest that it might be easier and cheaper to demolish the house and build something else. But hints weren’t enough. His duty was to turn up at 5am with a wrecking ball, and level the place.”
Christopher Stevens, Daily Mail

“Inspired, apparently, by Jack Dee’s own addiction to property shows, it’s one of those rare comedies that makes you feel better about your lot. Provided you haven’t just bought a remote farmhouse, that is.”
Matt Baylis, Daily Express