Avenue 5; Spy in the Wild

“In space no one can hear you scream, ‘but this isn’t as funny as The Thick of It!’” 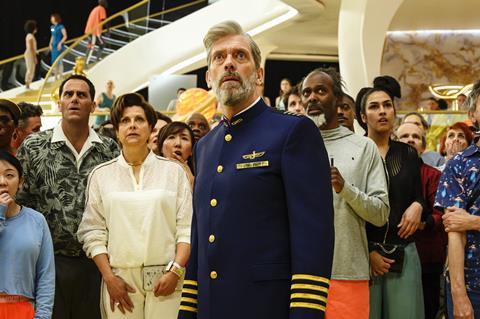 “Like the post-flip ship itself, Avenue 5 doesn’t seem to know quite where it is going or how long it might take to get there. By the end of the four episodes available for review, the plot had been back and forth along a few grooves that were already beginning to feel well-worn. The rest remained a disparate collection of delights and longueurs, despite the formidable talent before and behind the cameras.”
Lucy Mangan, The Guardian

“Avenue 5 has a great premise, an excellent cast and, in its creator, Armando Iannucci, a satirical comedy genius at its helm. So how come it wasn’t very funny? Certainly not as funny as its CV suggested it would be. It just goes to show that even delicious-looking recipes can taste off.”
Carol Midgley, The Times

“It is an intriguing premise, but anyone expecting it to be up to Iannucci’s usual standards is going to be let down. In space no one can hear you scream, ‘but this isn’t as funny as The Thick of It!’”
Anita Singh, The Telegraph

“It’s meant to be a satire on customer service, setting the grandeur of space travel against the jargon and barely hidden disdain of the ship’s crew. Unfortunately, the staff’s buzzwords and fakery felt a little bit forced, and the customers bordered on caricature. Avenue 5 lacked the understated laughs of The Thick of It.”
Barbara Speed, The i

“Sci-fi comedy doesn’t usually appeal to general viewers, since the comedy consists mostly of in-jokes. But Avenue 5 is more like a send-up of disaster movies. It just happens to be set in space.”
Christopher Stevens, Daily Mail

Spy in the Wild, BBC One

“Just as robots will eventually steal our jobs, animatronic spy-camera animals look nailed on make wildlife cameramen (and women) redundant. Because the footage in Spy in the Wild was top-notch, hitting us immediately with some of its best stuff from a spy baby gorilla.”
Carol Midgley, The Times

“To watch their faces in close-up as they peered and poked was fascinating. A whole range of recognisable emotions flickered over their features — first fear and anger, then crossness, followed by puzzlement, wariness and then curiosity. All this was natural and uninhibited because they had no idea we were watching. That’s the marvel of this series.”
Christopher Stevens, Daily Mail