“This is crime drama at its addictive best” 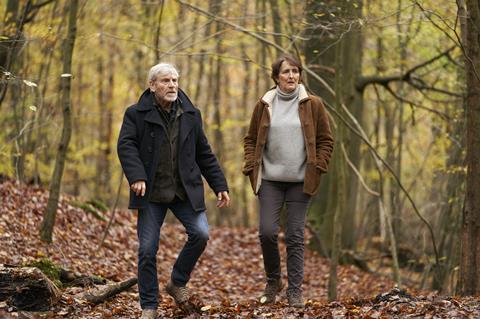 “The writers Harry and Jack Williams can be wilfully abstruse, here giving us the old split timeline device, which feels far too much like hard work. Can’t we just get on with the story instead of having to suss out why 14 months on Baptiste (Tchéky Karyo) looks like a wino and Chambers is in a wheelchair? Luckily, Shaw’s performance was pitch-perfect and Karyo has that same stillness and weighty presence that holds any scene. Chambers’s husband had been murdered while on holiday and her sons kidnapped, one of them evidently now dead, the other still missing. Given that her daughter also died two years ago, this is bleak, dour territory. All that loss happening to one woman?”
Carol Midgley, The Times

“Initial signs, in a complex opener that revealed both the beginning and the aftermath of a murder hunt, are that this is crime drama at its addictive best. Fiona Shaw, so good at upper-middle class career women who are clueless with their own families (exactly as she is in Killing Eve), plays the British ambassador to Hungary. She wakes up one morning to find her husband and two sons have vanished. In a parallel timeline, 14 months later, she wakes up, hauls herself into a wheelchair (how she comes to be paralysed we don’t yet know) and drives to Paris with a tattooed hostage in the boot of her car. There she finds detective Julien Baptiste — a broken drunkard. It’s a typically brilliant piece of stage setting by writers Jack and Harry Williams. I can’t wait for the rest and hope to review it more fully next week.”
Christopher Stevens, Daily Mail

“But behind the bullshit (no match, you would think, for its Anglo-Saxon variant) Baptiste grieves. The directors visualise his pain through a toy elephant that used to belong to his daughter. His daughter’s death gives his professional life personal resonance. In The Missing and in this spin-off, he is a man doomed to wander a spectral Europe where human life is a commodity first and murder casually committed. Here, Baptiste is kin to two other TV detectives: Kari Sorjonen of the superb Finland-set Bordertown and Bosch’s Harry Bosch are fathers to adored and impressive daughters, and often tasked with solving crimes involving the terrible things men do to young women.”
Stuart Jeffries, The Guardian

“Baptiste writers Jack and Harry Williams build their shows like intricate puzzles. Their latest was full of moving parts and hidden compartments, and it embraced the risky strategy of splitting the story across two timelines.”
Ed Power, The i

“Professor T is one of the most tonally jarring TV dramas I have watched for some time, mirthfully whimsical one moment, horrifically dark the next. Imagine if Tom and Barbara in The Good Life had a sideline in snuff movies, or Miss Hoolie in Balamory went home to be a spanking dominatrix. At first I assumed it was going to be an Inspector Morse rip-off, set in Cambridge not Oxford, but no. Morse would never break into dance on a college rooftop or have a mother (Frances de la Tour) who puts her chihuahua in a bubble bath. As it happens Ben Miller plays Professor Jasper Tempest — a semi-genius forensic criminologist who lectures at Cambridge and solves crimes by hypnotising people, all while battling OCD and a mother complex — extremely well. It’s the plot that grates.”
Carol Midgley, The Times

“The show is a remake of a Belgian original, which partly explains why it feels dated. That’s exacerbated by the university setting, echoing Morse, Grantchester and a stack of others. Professor Jasper Tempest doesn’t listen to opera or drive a vintage car (though he probably will, given time). He prefers to solve cases by sitting on the roof and gazing out across the spires. All of this could be lifted from any classic detective series from decades ago. What really made the first episode seem out of touch, though, was the choice of crime. Since the appalling murder of Sarah Everard as she walked home earlier this year, and the national wave of revulsion that followed, it feels callously inappropriate to continue depicting such attacks as the standard fare of cosy crime serials.”
Christopher Stevens, Daily Mail

“Tempest’s behaviour is a result of childhood trauma, yet this is often told through comedy. Frances de la Tour, as his mother, gave her Chihuahua a bath. When Tempest referred to his students as a flock of chickens, he imagines them as just that. At one point, he and a female character danced a tango on a rooftop, for no other reason than Cambridge looking pretty. He is emotionally stunted and rude.
Anita Singh, The Telegraph