“It looks sumptuous and a cracking cast give it their all” 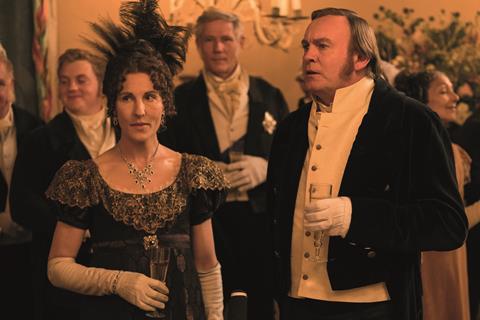 “Belgravia does not have Downton’s warm glow, nor a sense of humour. But taken on its own terms it is a satisfying watch, due to Fellowes’s writing. He is a master of pacing, knowing exactly how much drama to drop into an hour-long episode, and understanding that Sunday night audiences want history, intrigue and romance packaged as an upmarket soap opera.”
Anita Singh, The Telegraph

“It looks sumptuous and a cracking cast give it their all. But the opener had all the defects of the genre. The characters were two-dimensional. The dialogue was stilted. But when the likes of Gentleman Jack (and even Poldark) have brought a bit of grit to the ball – and not stopped at the door of the boudoir – this kind of over-decorous fare is starting to seem irritatingly over-familiar.”
Jeff Robson, The i

“Once we are ensconced with the Trenchards in their townhouse, we are introduced to the servants and all pretence that this is not Downton Abbey – in, uh, Belgravia – collapses. On the upside, Harriet Walter has arrived as Lady Brockenhurst and Alice Eve is an early Victorian meany of the first water.”
Lucy Mangan, The Guardian

“Belgravia has a similar dynamic to Downton and an upstairs/downstairs class obsession that included a deeply unsubtle expositional scene in the servants’ quarters in which they bitched about their paymasters. However, on the evidence so far I doubt it has the soul or soap-opera qualities that made Downton such opium for the masses.”
Carol Midgley, The Times

“What we got was something unexpected: a quite lovely study of relationships and all the messiness that real life entails, disarming in its moments of sweetness. There was one lyrical scene, in which the camera tracked Gemma and Kieran as they walked through the flat, that played out like a piece of modern dance. I don’t mean to make it sound pretentious. The drama is very much grounded in reality, albeit a hipster kind of reality.”
Anita Singh, The Telegraph

“Given the premise, this could have been a flashy and prurient trash-fest. One can imagine an American version with a ludicrously glamorous trio inhabiting a designer apartment and angsting in trendy bars. But here the leads are a lot more believable and the setting is the scruffy outskirts of London - a world of dilapidated caffs, cramped flats and gig economy workers.”
Jeff Robson, The i

“Trigonometry thinks it is desperately modern, though anyone who remembers the French nouvelle vague classic Jules Et Jim will know the story already. Despite its pretensions, an engrossing love triangle is developing. And if you enjoy great soul music, the closing title track by Lee Fields is a stunner.”
Christopher Stevens, Daily Mail

“This is a slow-burner. Too slow at times. But it is artful and naturalistic and Thalissa Teixeira as Gemma is so mesmerising to watch that the sluggish plot doesn’t matter much.”
Carol Midgley, The Times