Big Boys; The Flight Attendant; Who Do You Think You Are?

“One of the most funny, tender, profound sad-happy comedies I’ve seen this year” 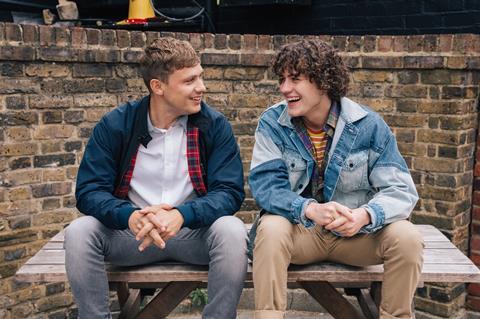 “It is warm and funny, but with a melancholic undertow that fades in and out as the episode – and the series – goes on, but never disappears entirely. Although it is gentler and less frenetic, Big Boys’ combination of frankness, heart and wit – and the seriousness with which it treats young people and the problems they face – evokes the mighty Sex Education. At the same time, writer Jack Rooke makes it entirely its own thing – and one that can pierce your heart when you least expect it.”
Lucy Mangan, The Guardian

“The heartfelt bits are skilfully woven around more standard comedy. Rooke nails the awkwardness of Freshers’ Week, including the girl downplaying her posh credentials. There are plenty of laughs, but at its heart this is the story of a friendship that you dearly hope will work out.”
Anita Singh, The Telegraph

“If you haven’t yet seen Big Boys, I strongly suggest you do. It’s one of the most funny, tender, profound sad-happy comedies I’ve seen this year and is worth anyone’s time, not just because it tackles the themes of grief, coming of age and sexuality with a beautifully light touch, but because the cast give the impression that they love performing it.”
Carol Midgley, The Times

“Big Boys borrows its plot tropes and supporting cast – the swot, the posh girl, the wise gay elder – from a host of sitcom classics set within universities, The Young Ones and Fresh Meat among them. But there’s always been rich comic potential in tales of freshers’ weeks and disparate young people tossed together and expected to get on. Big Boys has also found a real star in Dylan Llewellyn, who shone as perpetual insult magnet James on Derry Girls, but was rarely asked to do more on that show than be English and exasperated. Here he retains a fish-out-of-water sweetness, but finds within it a softer register and darker melancholy.”
Adam White, The Independent

“Kaley Cuoco has a Jennifer Aniston-like energy that makes you forgive all of Cassie’s many bad decisions, and keeps you rooting for her, even when she repeatedly proves how unlikely it is that the government would trust her to deliver a Christmas card, let alone a sensitive international operation. Given the style in which this is presented, which is fizzy and zippy, often showing multiple versions of the same scene on screen at once, you do have to strap in for its giddiness. But if you can’t get giddy with a daft spy caper about explosions, undercover agents, global travel and a woman having repeated conversations in her head with several different versions of herself, when can you?”
Rebecca Nicholson, The Guardian

“The second series of The Flight Attendant has finally landed. Unfortunately, it has been downgraded from first-class to standard. This sequel shakes things up, but in the process loses the chaotic energy which made Cassie’s adventures so compelling.”
Michael Hogan, The Telegraph

“As all shows with such efficient first seasons must, the second outing of The Flight Attendant walks the tightrope of modest reinvention, finding more road by shifting away from spycraft in the direction of character study. The result is a less tight whodunnit, but something that remains at its best when Cassie is complicating her own life, doubling down on mistakes while struggling to convince herself and everyone around her that she’s simply cruising.”
Amanda Whiting, The Independent

“Regular readers will know that I tend to be irritated by Who Do You Think You Are? because it indulges yet more celebrity navel-gazing and egotism, and there’s quite enough of that already. But I’ll make an exception for Sue Perkins, who strikes me as a very good egg indeed. And, sure enough, it was one of the better WDYTYAs, containing a couple of harrowing revelations from her family’s past.”
Carol Midgley, The Times

“The Sue Perkins episode of Who Do You Think You Are? had such a perfect story arc that it felt like a film script. Perkins deserved a joyous ending, because along the way her family story had been tough. Some Who Do You Think You Are? subjects are more articulate than others. Perkins never stopped talking, and it was clear that she had done a great deal of self-examination long before the show began.”
Anita Singh, The Telegraph

“It’s a pity Sue didn’t bring Mel along as she traced her ancestors, from Bodmin in Cornwall, to a ploughed and frozen field in Lithuania. While Mel got tearful, Sue was constantly cross. This is where Mel’s intuitive talent could have made the episode much better. Someone needed to explain to Sue that imposing your own outlook on the past, and expecting your ancestors to be treated according to 21st-century norms, is small-minded.”
Christopher Stevens, Daily Mail