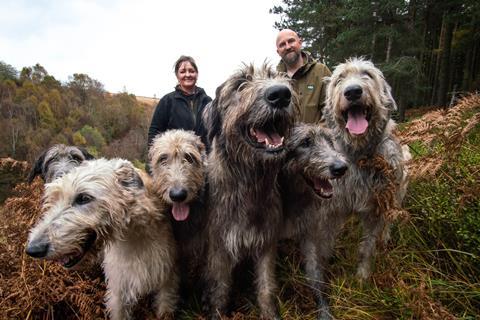 “Two big dogs are enough for one small household, aren’t they? It was quite difficult to fathom the couples who lived with five Newfoundlands, or five St Bernards, or – and this really was mad – 10 Irish wolfhounds. You could almost smell the sofas through the television screen. Owning so many dogs is actually more intriguing than the fact of their size, but we didn’t get too far in examining that.”
Anita Singh, The Telegraph

“This whole hour was an unremitting advert on behalf of the Dog Party. We met a couple with ten Irish wolfhounds, and another pair with five St Bernards (and a sixth on the way).The only voice of dissent came from Wade, a young lad whose mum and dad kept half a dozen Newfoundlands at their cottage in Northumberland. Wade was a cat person. But in a family where a Newfoundland dog was Best Woman at his parents’ wedding, Wade’s chances of a tabby kitten for his birthday were nil.”
Christopher Stevens, Daily Mail

“It was quite unsettling at first to find cameras in such an intimate space, waking up with this small person and watching her play, even if it reminded you how lonely childhood can be, while also demonstrating how deeply the director Sébastien Lifshitz clearly earned her trust. The exquisite intensity, tenderness and occasional moments of anger did not let up and Lifshitz’s film-making was often sublime: the child-level camera work, soft pastel palette and quietly revealing scenes, such as her playing football with her siblings wearing what we might think of as very “girly” shoes. This was film-making with a light touch and profound depth.Sasha was our captivating emotional centre, but also commanding our attention was Karine, her fighting force of a mother.”
Ben Dowell,The Times

“It skims so lightly over so much that it feels more like an extended commercial than a piece of factual programming – especially given its numerous glossy sequences out on the field, following the games that bookend the show and the training sessions at dusk and dawn, interspersed with moody pre- and post-match locker-room moments, and jazzily shot pep talks. Such elements are pleasant enough, but unspecific and unworthy of the amount of time they take up. However, viewed as a small-scale, aurally immersive introduction to a world largely unknown to the general public , it works beautifully.”
Lucy Mangan, The Guardian