Bloods; Carry On Glamping; The Battle for Britney; Unsolved 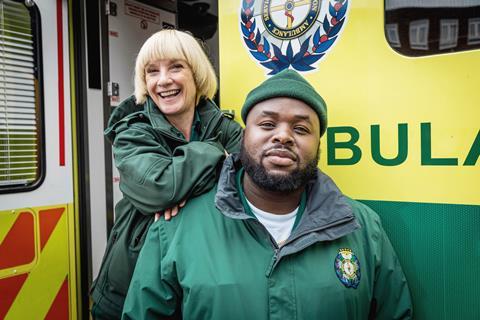 “The brio and energy that Famalam’s Samson Kayo – who also co-created this series – brings to the role is a joy to behold. You are never in any danger of needing any stitches in sides split from laughing. But if (by halfway through, at least) Bloods remains patchily written, it is beginning to cohere and take on a charm and warmth that, with a bit of a punch-up to the script, could turn it into something well worth a weekly 22 minutes of your time.”
Lucy Mangan, The Guardian

“Bloods is an enjoyably silly odd-couple comedy about paramedics. Kayo has great comic timing and the character has a freshness. But the show also feels as if it’s slightly hedging its bets to reach a wider audience, and that Horrocks should be in another show entirely. In general, though, the tone works – the paramedics attend drugs overdoses and grisly road traffic accidents and the humour is just dark enough.”
Anita Singh, The Telegraph

“If the traumas of the last year have left your sense of humour in critical condition, then this is the show to rescue you. Horrocks is at her seasoned starry best, but the standout talent here is Kayo. He is one of those rare gifted comic actors who can make you chuckle just by pulling a smirk.”
Sean O’Grady, The Independent

“The six-part series has a stellar cast. But judging by last night’s opener, the programme as a whole was one wheel short of an ambulance. There’s a reason why medical comedies such as Green Wing have traditionally kept patients on the sidelines, or avoided showing them at all. A darker, more twisted sense of humour might have landed, but Bloods’ farcical, light tenor was hard to buy into while patients bled out in the foreground.”
Barbara Speed, The i

“I’m not sure what I was expecting from Johnny Vegas: Carry On Glamping – perhaps a jolly team of experts building a glampsite, with Vegas wheeled in for laughs. Whatever it was, it certainly wasn’t this. This first episode was almost uncomfortably raw, as an opening sequence made clear that Vegas was tired of showbiz and of his own persona, and wanted to flex the creative muscles that led him to art school in his younger days. Surprising, yes, for a programme about sexed-up camper vans – but his vulnerability and passion made for riveting TV.”
Barbara Speed, The i

“Johnny Vegas appeared to be in genuine emotional distress as he struggled to set up a campsite business, converting clapped-out buses into holiday cabins on Carry On Glamping. The film-makers were expecting it all to be a giant lark, too. Their camera trailed after Johnny, desperate for quips and ad libs. Most of the time, he looked closer to tears.”
Christopher Stevens, Daily Mail

The Battle for Britney: Fans, Cash and a Conservatorship, BBC2

“The temptation throughout was to compare Mobeen Azhar’s documentary with Framing Britney Spears, the much better one made by Samantha Stark for The New York Times, which had the world talking in February. The best Azhar could do — and these were presented as if they were Pultizer-worthy scoops — was to interview a dancer, a make-up artist and the daughter of Peter Falk, the Columbo actor, who had also been a conservatee. It was thin pickings.”
Ed Potton, The Times

“The film was such a non-event that it was difficult to understand why the BBC didn’t dump it as soon as they realised the NYT had got there first. His interviewees were a dancer who hadn’t seen Spears for years and a waitress who hadn’t seen her either.”
Anita Singh, The Telegraph

Unsolved: An Alibi For Omar?, BBC1

“Unsolved: An Alibi For Omar? shredded the evidence of witnesses, most of them drug addicts, that sent Omar to jail. But Northern Irish journalist Bronagh Munro failed to give us any sense of the woman who was murdered.”
Christopher Stevens, Daily Mail