Breast Cancer and Me; Rebuilding Notre Dame; Where Have All the Lesbians Gone?; Under the Banner of Heaven 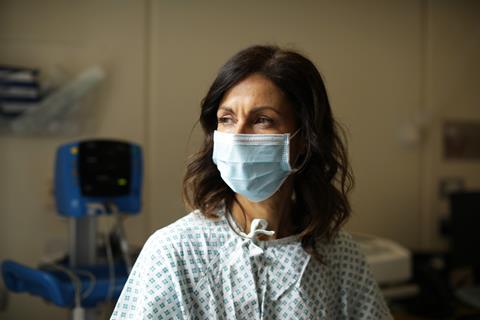 “Celebrity cancer journeys are now common TV currency and you can be cynical about that if you like, but I have yet to see one that isn’t a) moving and b) very worthwhile. Julia Bradbury: Breast Cancer and Me was also extremely generous, with Bradbury, the former Countryfile presenter and a mother of three young children, allowing the cameras to record the most personal and intimate moments of her treatment for breast cancer when she was at her most fragile. It was a brave and thoughtful film.”
Carol Midgley, The Times

“For those of us who fear that we may one day receive the same diagnosis or who have already received it, the programme was helpful. Not that it was an easy watch. We are used to seeing Bradbury as the upbeat presenter of walking shows. Here, interviewed in hospital rooms or recording video diaries in the days leading up to her mastectomy, she was tearful and afraid. It was a stark, unflinchingly honest account. Nothing was off-limits, as Bradbury showed us her newly reconstructed breast. And thank goodness for programmes like this that tell us the truth − both the good and the bad.”
Anita Singh, The Telegraph

“This moving and important documentary, following her and her family in the days before and after her mastectomy, offered a brave public insight into a deeply private ordeal. This programme will have given heart and reassurance to many. It also provides a reminder that, however unruffled the surface of a presenter’s life might appear, there is so much the camera does not ordinarily see.”
Christopher Stevens, Daily Mail

“It was breathtaking to see just how much work is involved, such as sourcing 2,000 perfect oak trees for the roof beams alone. It has turned out also to be a lesson for the experts in how brilliant medieval builders were, their skill and attention to detail ensuring the walls didn’t collapse in the fire.”
Carol Midgley, The Times

Where Have All the Lesbians Gone?, Channel 4

“Given the broadcaster’s liking for controversy, I feared this would be a new salvo in the transgender wars. But it turned out to be a moving and celebratory film, directed by Brigid McFall, a little bit of social history told via a group of women being interviewed about their experiences.”
Anita Singh, The Telegraph

Under the Banner of Heaven, Hulu

“It’s the sifting of what separates Mormonism from the fundamentalist religions practised in its name that distinguishes Under the Banner of Heaven from the glut of true crime offerings on TV right now. It’s rare for Mormonism to get such subtle treatment in popular culture, with Broadway juggernaut The Book of Mormon and TLC’s reality series Sister Wives offering more scurrilous takes on the religion.”
Amanda Whiting, The Independent

“As a whole, the series is almost always discomforting, relentlessly ominous and occasionally nauseating. What’s clear is that the church is more protective of its reputation than its people, like many other large institutions. Such institutions promise clarity, but people are messy. As a series, Under the Banner of Heaven struggles to maintain focus, but it never loses faith in that fact.”
Adrian Horton, The Guardian