Britannia; Inside the Supermarket; Charles: 50 Years a Prince

“Anyone who went off Britannia during the first series because it was madder than a wasp in a jam jar should know this: series two is even more batshit crazy” 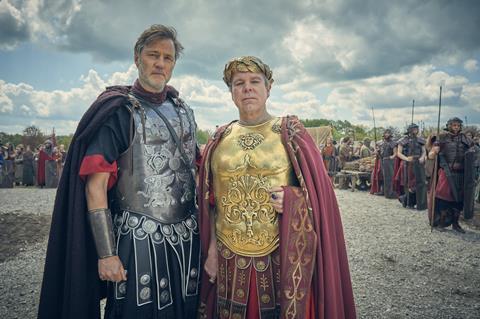 “Creators Tom and Jez Butterworth have accepted Sky’s visibly generous production budget and handed back not the epic sweep of an august historical fable, but a grinning Mardi Gras of gnarled mysticism, gamey dialogue and ultra-gore, with a bubbly sitcom undercurrent. None of this amounts to much dramatically or emotionally, of course. Britannia is one of those shows you just have to imbibe, celebrating that it has the sheer cheek even to exist. Praise the capricious TV gods!”
Jack Seale, The Guardian

“Anyone who went off Britannia during the first series because it was madder than a wasp in a jam jar should know this: series two is even more batshit crazy. It is totally off its head. It is also camp, ironic and funny. Despite losing faith with Jez Butterworth’s drama about the Roman invasion last time, I’m resold because it went full-on for laughs, largely in the form of Steve Pemberton as Emperor Claudius, plagued with haemorrhoids.”
Carol Midgley, The Times

Inside the Supermarket, BBC1

“The obvious question about Inside the Supermarket is: how will they get six episodes out of this? There’s a limit to how many times you can be told that Mother’s Day is a big day for retail and remain interested. This wasn’t a bad documentary, albeit a fat plug for Sainsbury’s as it tried to pull off a merger with Asda. However, visits to distribution centres rarely make for gripping TV.”
Carol Midgley, The Times

“So much for the Beeb’s policy of never promoting brand-names. Still, it made the show fractionally more interesting, to imagine that President Kim Jong 10p of the People’s Republic of Asdaprice was planning a brutal takeover, to subjugate the happy folk of Sainsburyworld. Otherwise, we were left looking at a junior manager fussing over the cellophane around bunches of carnations.”
Christopher Stevens, Daily Mail

Behind the scenes: Inside the Supermarket

“The programme served as a brief history lesson on the drama of the day. The rest of the hour was taken up with the Prince talking about his love of the Welsh countryside, the Welsh people, Welsh crafts and his Welsh cottage. Expect more of this sort of thing: documentaries that befit a future king.”
Anita Singh, The Telegraph

“The chance to peek inside Llwynywermod, the haven Charles and Camilla have quietly created for themselves, was genuinely unexpected. Like many viewers, I’ve explored the gardens of the Prince’s official residence at Highgrove in Gloucestershire with great interest, but I’d no idea the couple had this place tucked away in Carmarthenshire.”
Christopher Stevens, Daily Mail