“It is as warmly vicious, and viciously warm, as it has always been, and its acid tone cuts through with as much originality as it did in 2015” 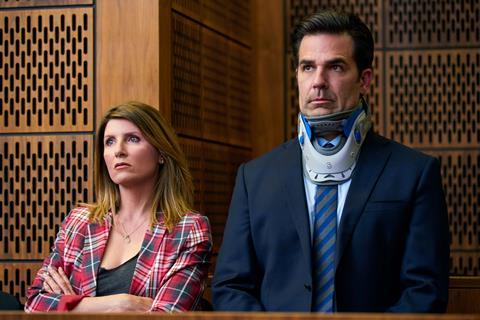 “Sharon Horgan and Rob Delaney have wallowed in their brutally unsentimental fictional on-screen romance for four years now, and what a relief it is to have it back. It is as warmly vicious, and viciously warm, as it has always been, and its acid tone cuts through with as much originality as it did in 2015.”
Rebecca Nicholson, The Guardian

“This intimate, honest series is unafraid to tackle tough topics – addiction, depression, loneliness, financial insecurity, the stresses and struggles of parenthood. Yet just like life, amid all the messy reality, there were belly laughs and glimmers of warmth. The writing was a joy.”
Michael Hogan, The Telegraph

“Good taste has never been a concern for Sharon Horgan and Rob Delaney, the writers and stars of Catastrophe. This coarse, uproarious comedy was back after a gap of nearly two years, and built up to a really raunchy gag about a neck brace.”
Christopher Stevens, Daily Mail

“As a Top Trumps approach to history, it should work well as a means of prompting debate in 11-plus classes. For the rest of us, the series is as likely to spur a debate about whether or not comparing Muhammad Ali with Tanni Grey-Thompson, or Albert Einstein with Tu Youyou, is totally pointless. Yet, all that aside, this was an enjoyable conversation starter.”
James Jackson, The Times

“Taking inspiration from the talent show format must have struck the BBC as an innovative way of bringing factual programming to a wider audience. But in execution the folly of Icons is laid bare as it is confirmed that comparing historical apples to oranges is simply bananas.”
Ed Power, The Telegraph

“The pathologists were on gruesome, mundane form, like Seven in the style of Holby City, as a group of trans people were targeted by a maniac — a bleakly depraved way of signalling politically correct trans issues and ticking BBC boxes for diversity in its casting. I’m not sure quite, though, what the trans community will have made of a storyline that flirted with the notion of repressed gender dysphoria as cause for lethal mental instability.”
James Jackson, The Times

“In recent years the show has preached about people trafficking and the demonisation of Muslims. Now it’s tackling transphobia, by depicting the slaughter of trans men and women who dare to use public toilets. For the writers of Silent Witness, good taste is almost as alien as realism.”
Christopher Stevens, Daily Mail